Tsarnaev Guilty On All Thirty Counts 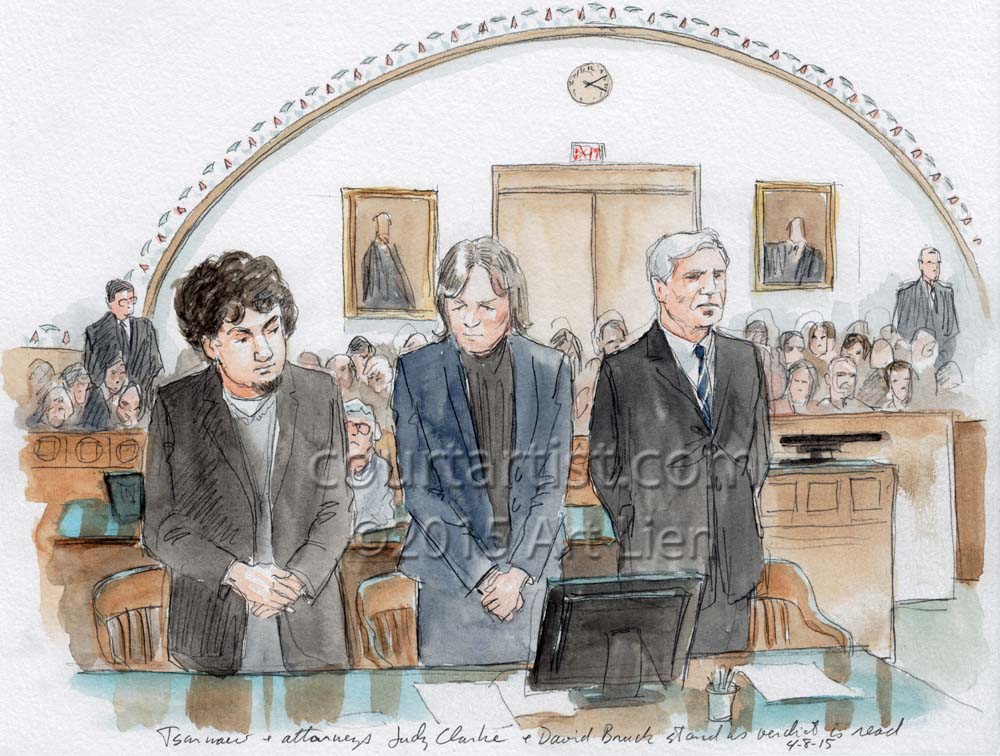 I think it took close to thirty minutes for the court clerk to read all 99 answers on the thirty count verdict form. Enough time for two sketches, though done from a low resolution video monitor in the overflow courtroom since seating in the actual courtroom would have provided only a view of Tsarnaev from the back. Very frustrating. 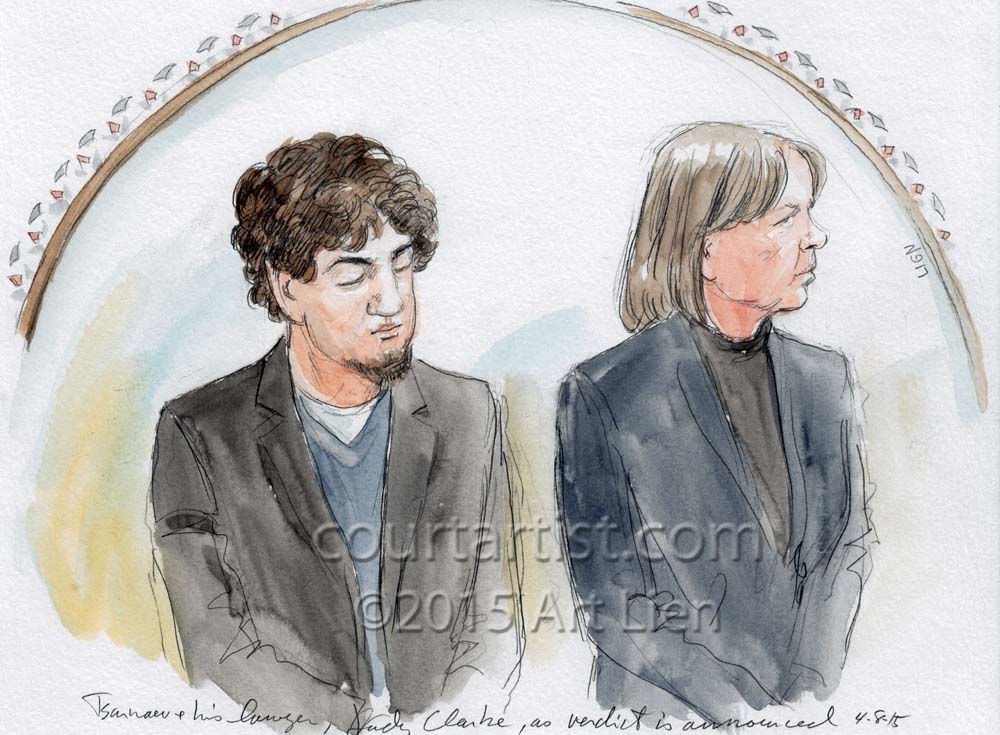 Tsarnaev showed no emotion as the verdict was read. Most of the time he looked down at some papers, occasionally he shifted awkwardly bringing a hand up to his face or slipping it in his pocket for an instant. He has a strange way of movement, especially when he comes into the courtroom, swinging his shoulders up and down, side to side. I guess you’d say he was strutting. 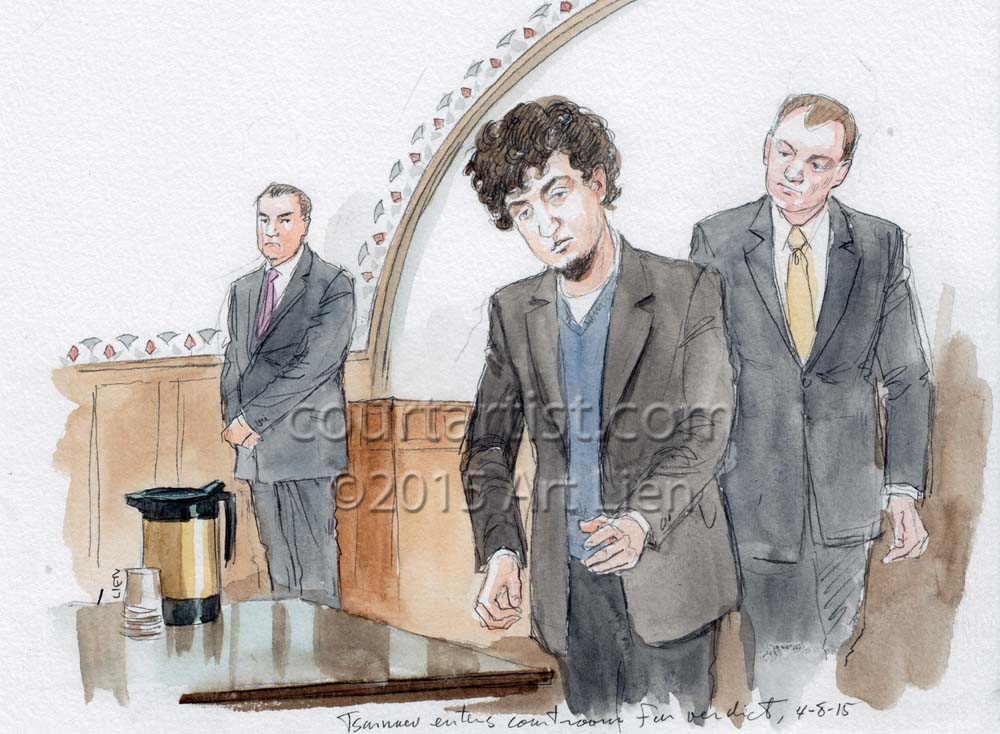 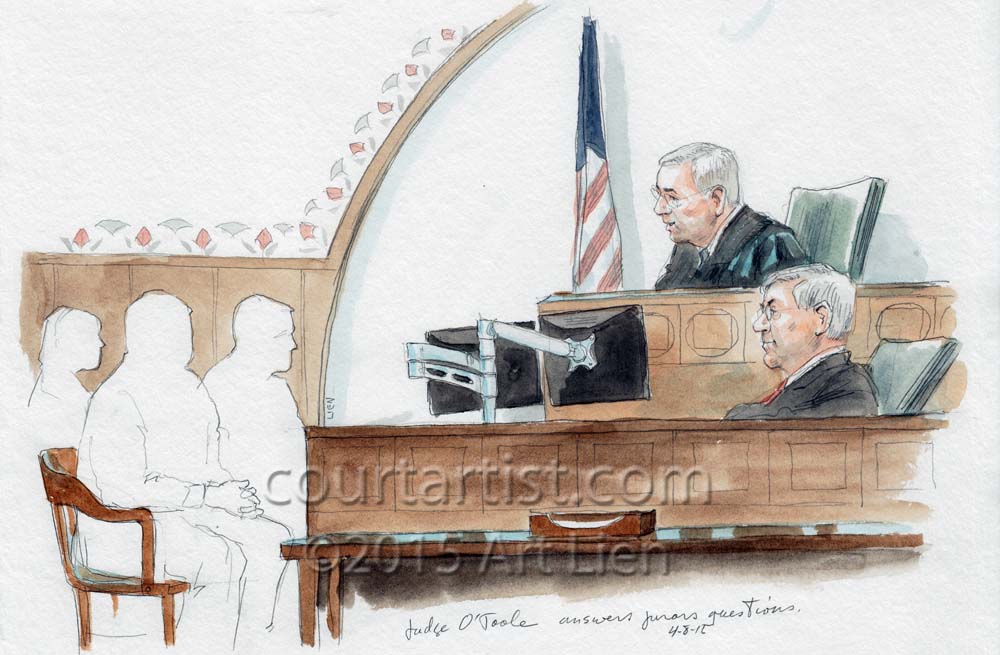 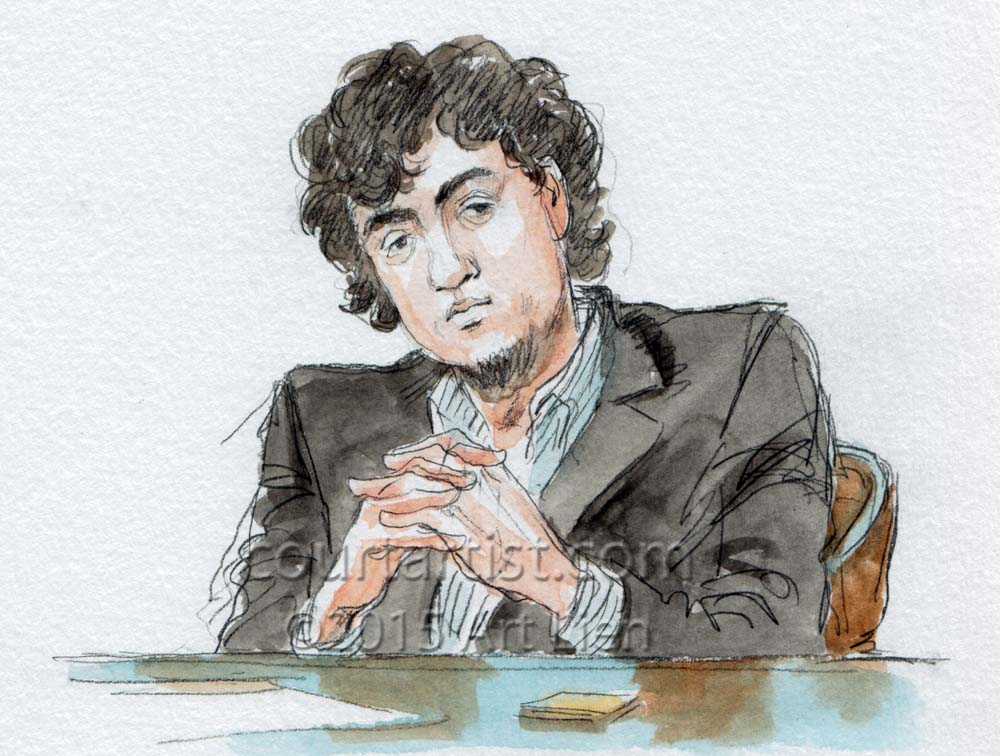 We only see Tsarnaev from the back when seated in the courtroom, so I did these sketches from the video monitors in the overflow room. 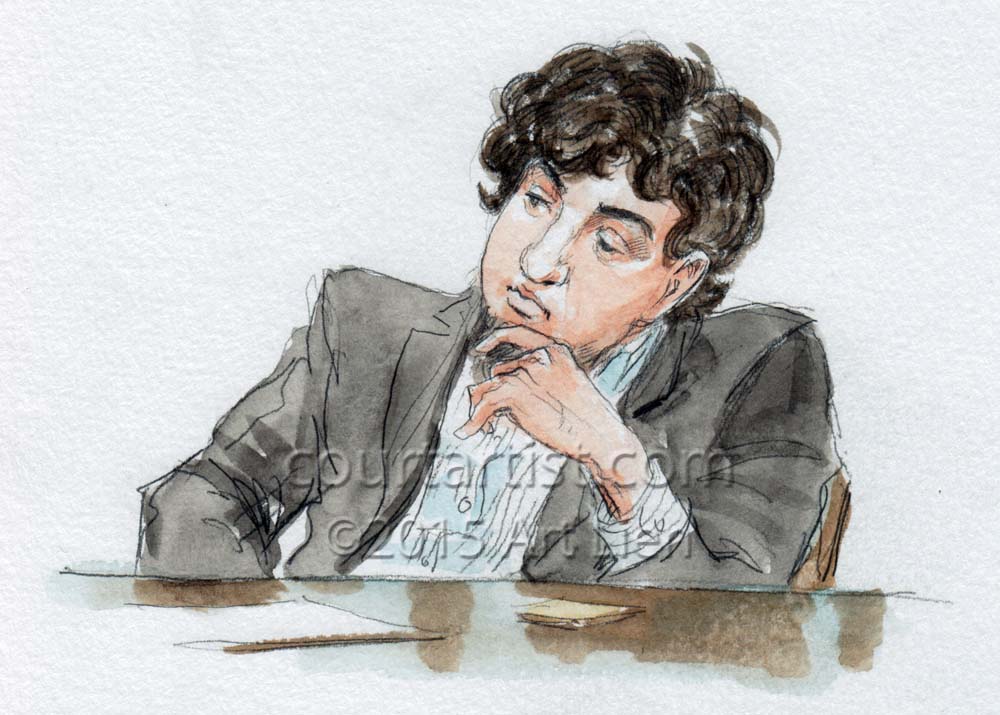 I’ll probably do this same thing when the verdict is announced in order to capture his reaction, or lack of it. 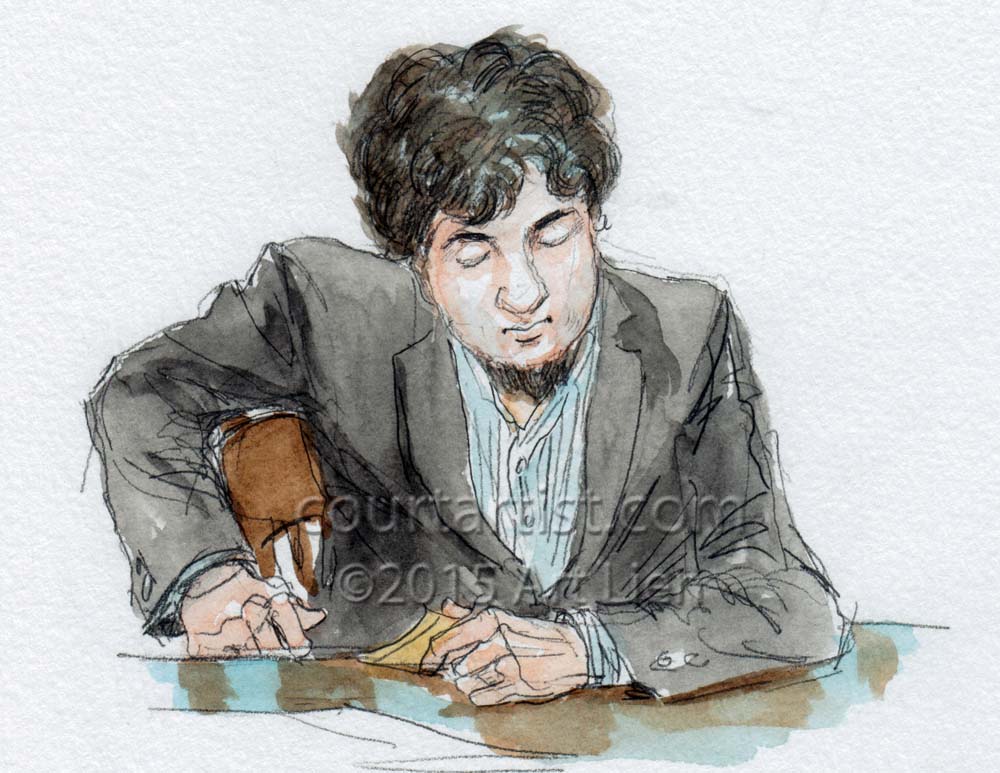 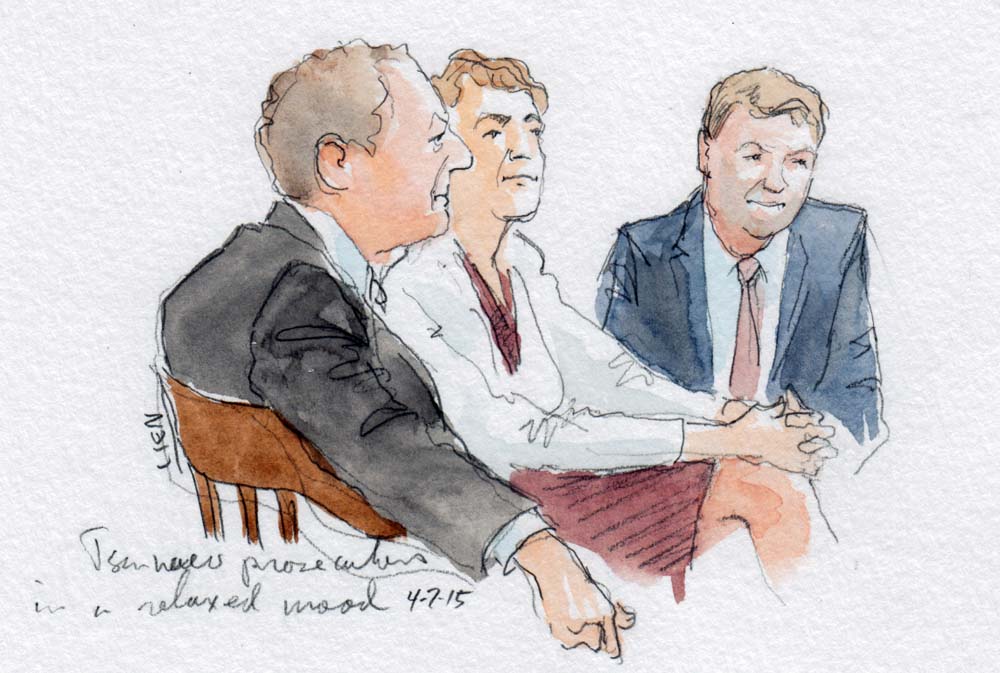 With the outcome all but certain the prosecution in the Boston Marathon bombing trial was noticeably relaxed in the courtroom this morning before the jury assembled to begin deliberations. 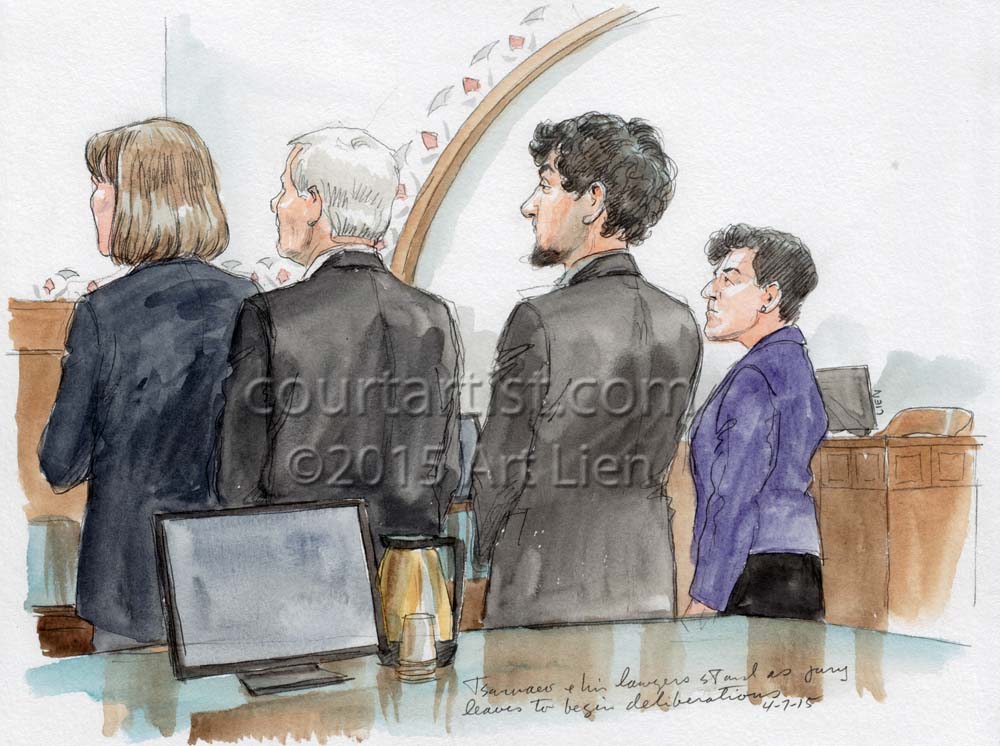 There wasn’t a whole lot to do but wait. 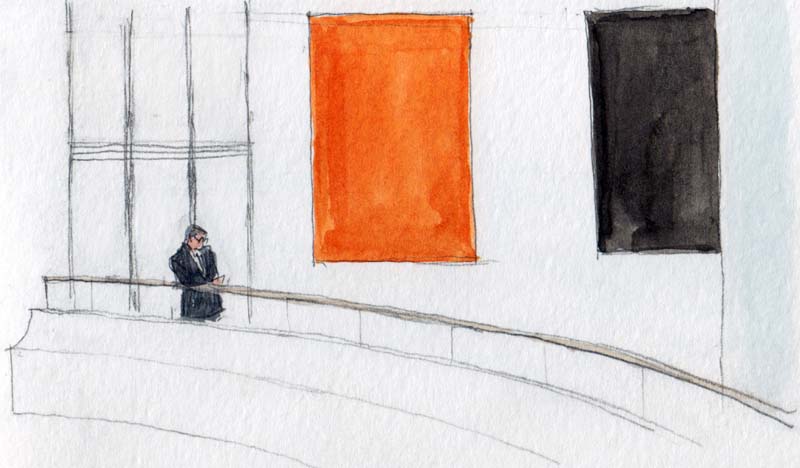 A US marshal, we’ll call him Steve, stood near two large Ellsworth Kelly paintings guarding the entrance to courtroom 9. And I had a chance to finish a little sketch I started on St. Patrick’s day. 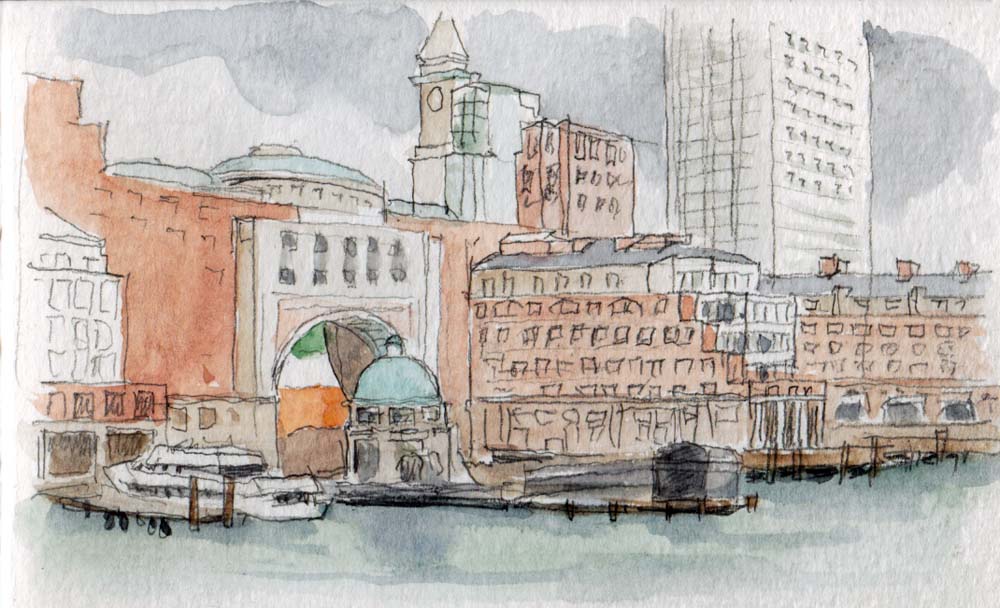 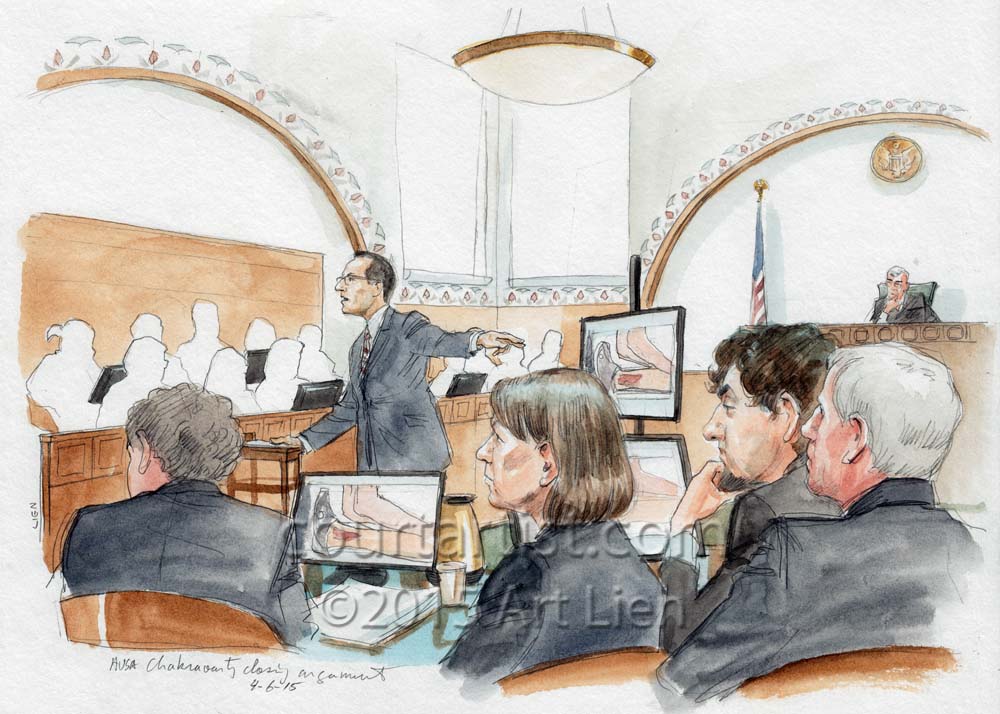 Prosecutor Aloke Chakravarty gave a powerful closing argument today as the case against Boston Marathon bomber Dzhokhar Tsarnaev goes to the jury after weeks of testimony. 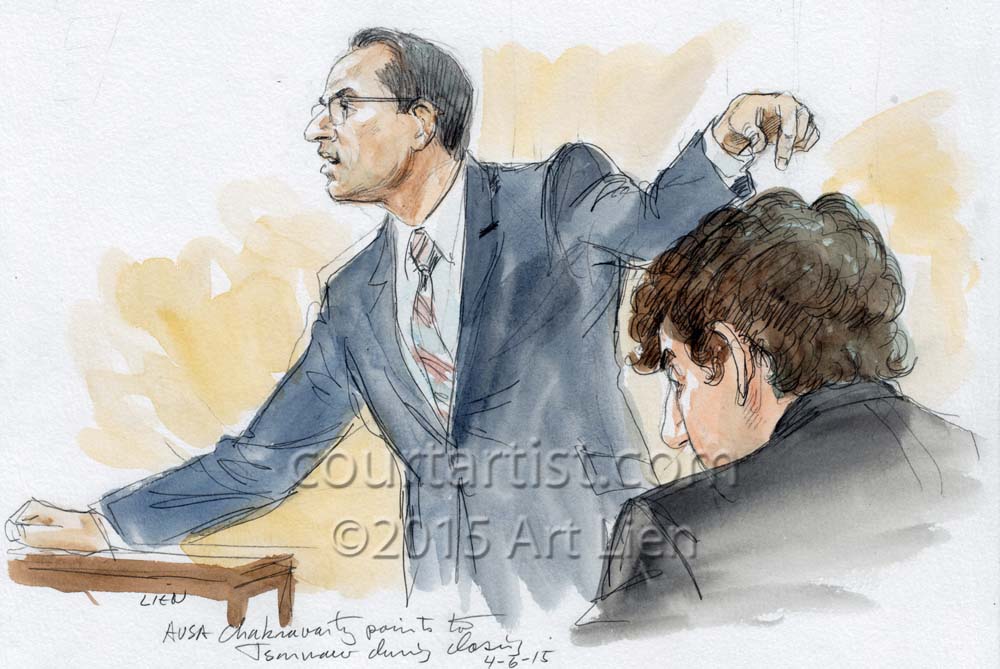 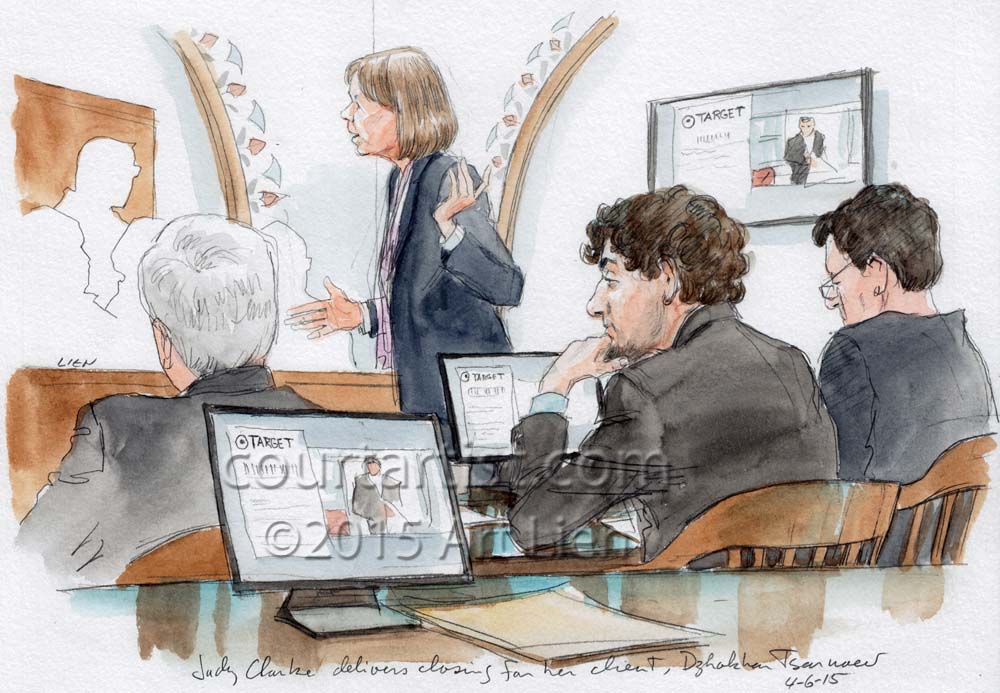 The defense did the best they could, admitting that Dzhokhar planted the bomb at the marathon finish line while shifting most of the blame to his older brother, Tamerlan. But their strategy to save Dzhokhar’s life won’t fully come into play until the case moves into the death-penalty phase. 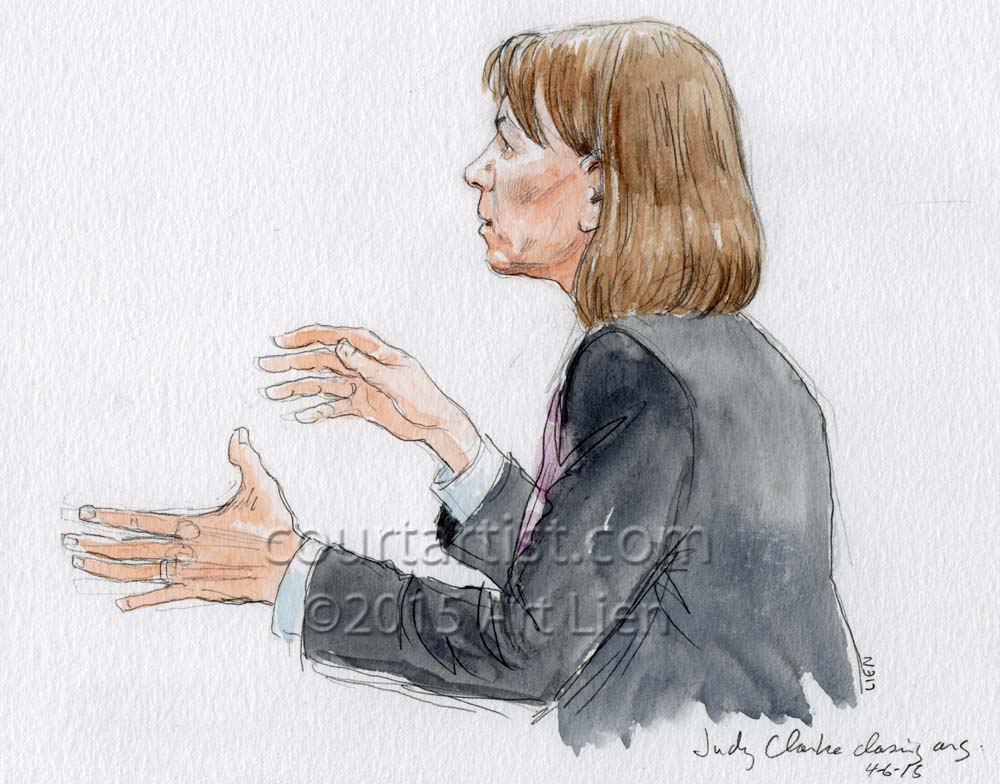 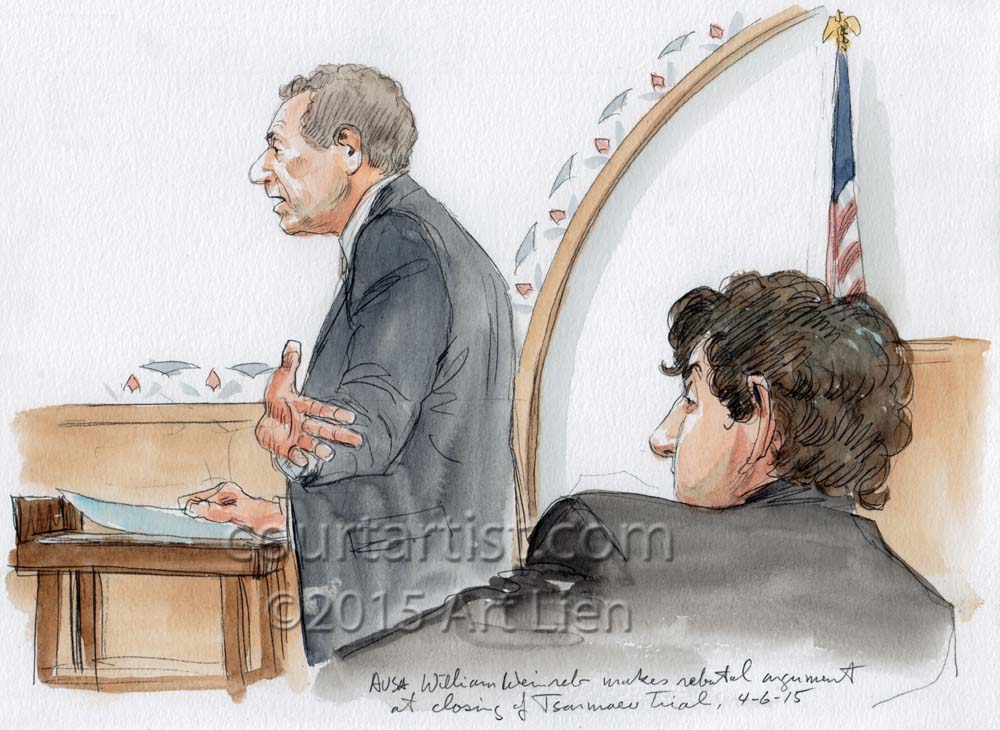 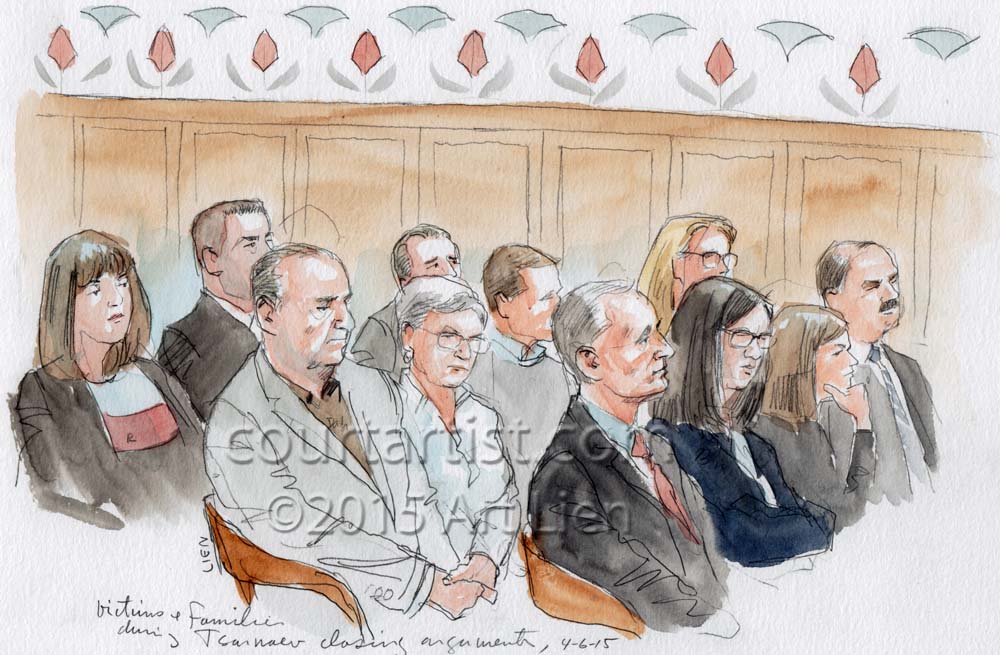 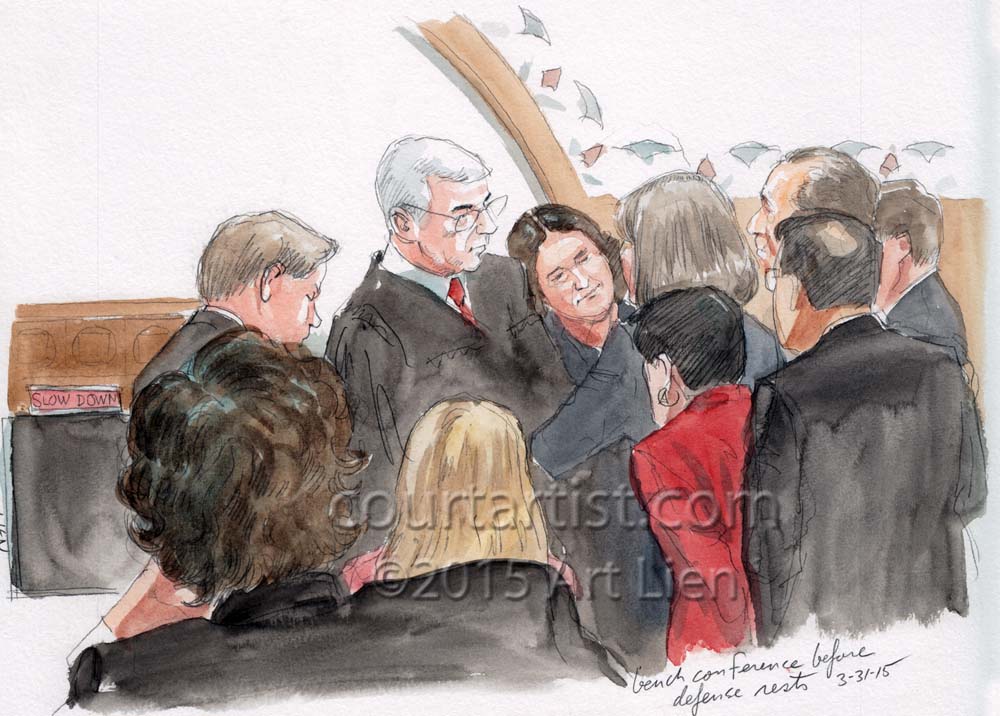 After a series of bench conferences during which, presumedly, a stipulation was hammered out, the jury was told that one of the victims of the Marathon bombing was a foreign citizen. Then the defense rested after calling just four witnesses. 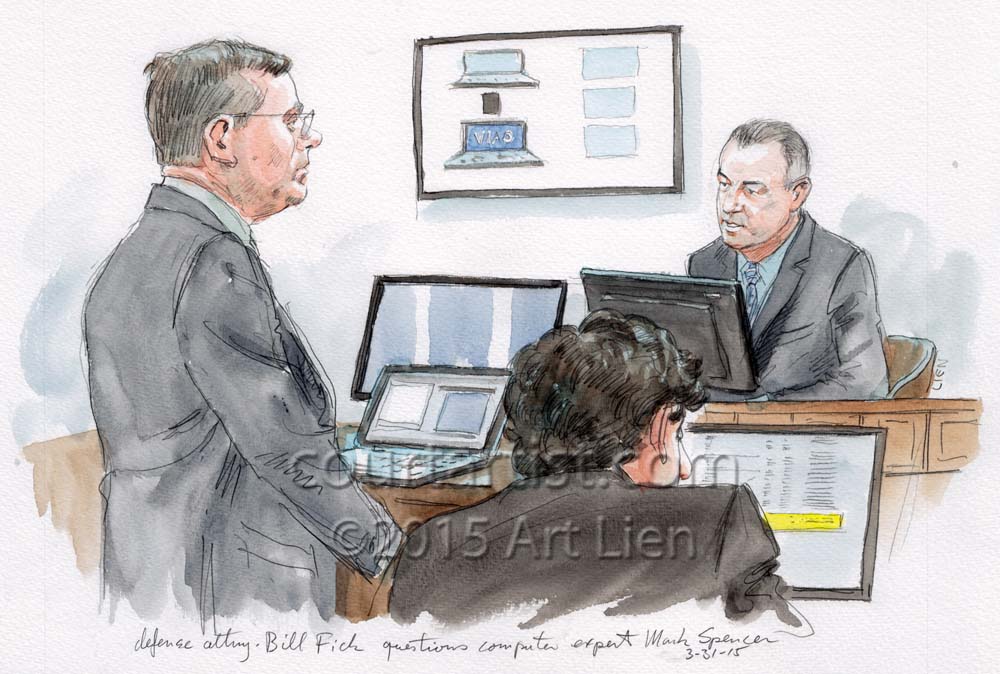 A forensic computer expert testified that searches relating to the marathon, and Ruger handgun were made on Tamerlan’s Samsung computer, while most of the searches on Dzhokhar’s Vaio computer were related to social media. 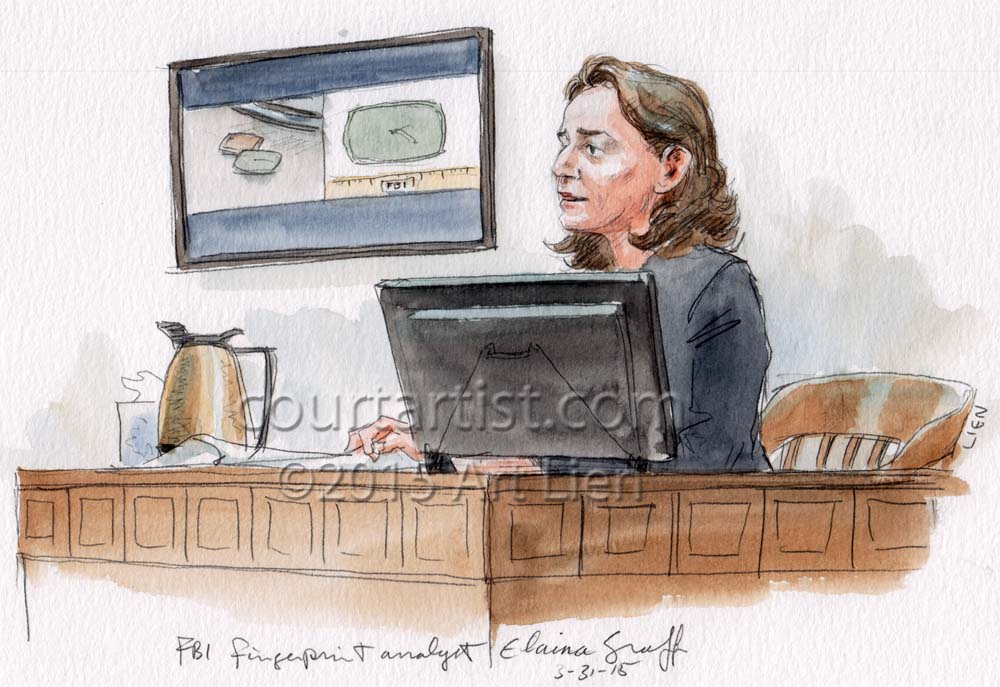 An FBI fingerprint analyst, who was originally scheduled to testify for the prosecution but was instead called by the defense, said that the only prints that belonged to Dzhokhar were lifted from a plastic food container filled with explosive, while his brother Tamerlan’s prints were on a transmitter, a pressure cooker lid, a jar of nails, a caulking gun, rolls of duct tape and a soldering iron. 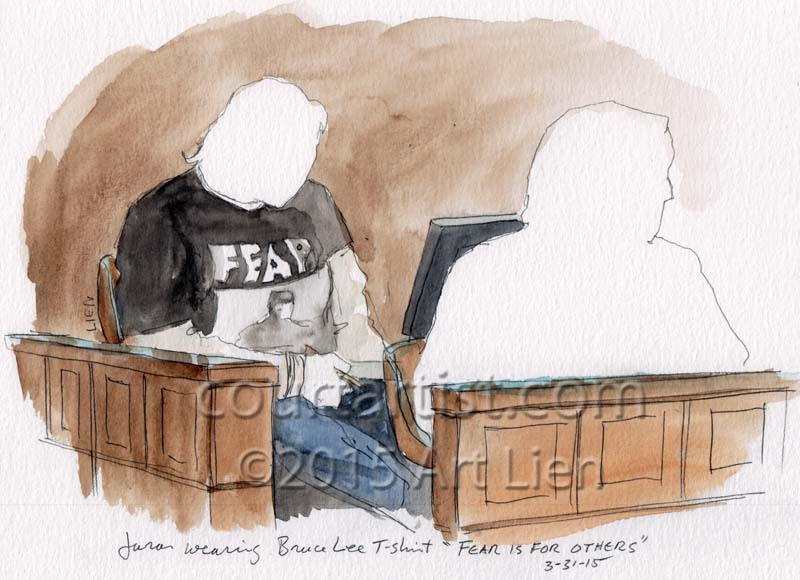 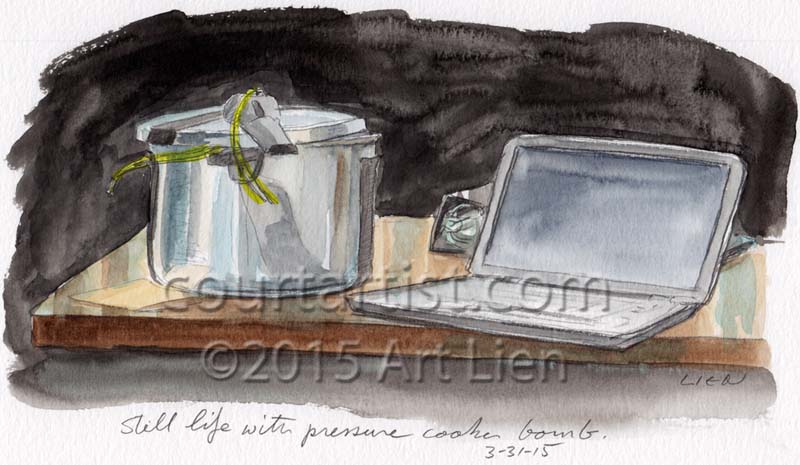