Deferred Action For Parents Of Americans . . .

. . . and Lawful Permanent Residents, or DAPA, was before the Supreme Court today.

A very large crowd supporting the president’s immigration policy was gathered in front of the Court’s plaza. Some had been there since Friday hoping to get a seat inside the courtroom for the arguments in United States v. Texas. And the courtroom was in fact packed with spectators full of anticipation, hoping to get an inkling as to which way the Justices may rule.

But at the end of the hour and half of mostly technical argument there was little to glean. You an read about it here.

Back on the bench after their winter break the first case argued before the Justices was on the subject of consular nonreviewability.

There’s a long history of leaving the power to regulate immigration to the legislative and executive branches. The courts have generally declined to review how the State Department decides who comes into the country. But the door to review may have been opened a bit by a 1972 Supreme Court opinion, Kleindienst v. Mandel, where, while upholding the Attorney General’s right to refuse entry to a Belgian Marxist, the Court said the “executive exercises the power . . on the basis of a facially legitimate and bona fide reason”.

Today’s case, Kerry v. Fauzia Din, involves a U.S. citizen who sought an immigration visa for her Afghani husband. The embassy rejected the visa application citing “security and related grounds”, i.e. “terrorist activity”. No further details for the rejection or review of the decision were forthcoming, so Din filed suit in District Court. The lower court dismissed but the Ninth Circuit reversed and found that the government owed her “a facially legitimate reason”.

And no, Justice Sotomayor did not break her arm over winter break. The black cast she is sporting is from a surgical procedure and due to come off later this week. It did not slow her down as she jumped into this morning’s argument with the first question. 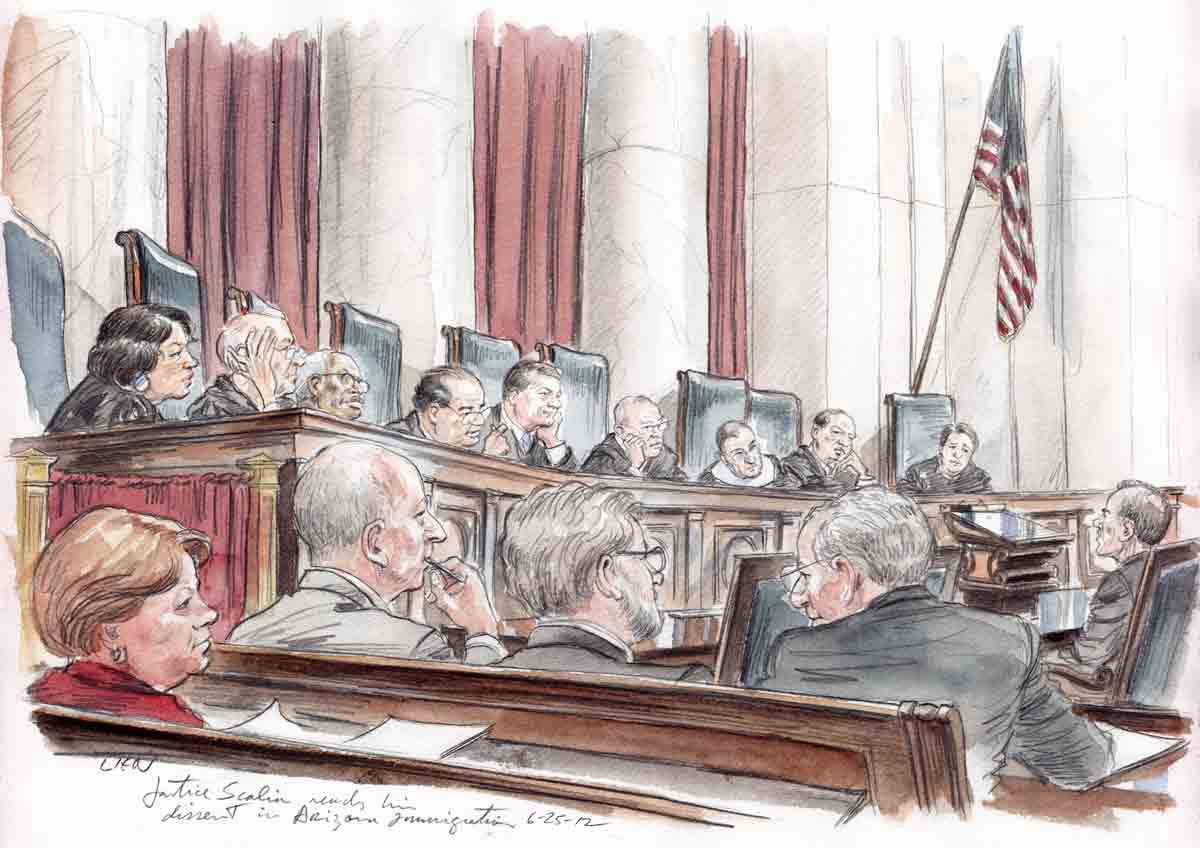 Sketches of the Supreme Court announcing its opinion in Arizona v. U.S. The Court upheld in part and struck down in part Arizona’s law, SB 1070, aimed at curtailing illegal immigration. Justice Kennedy wrote for the majority….. 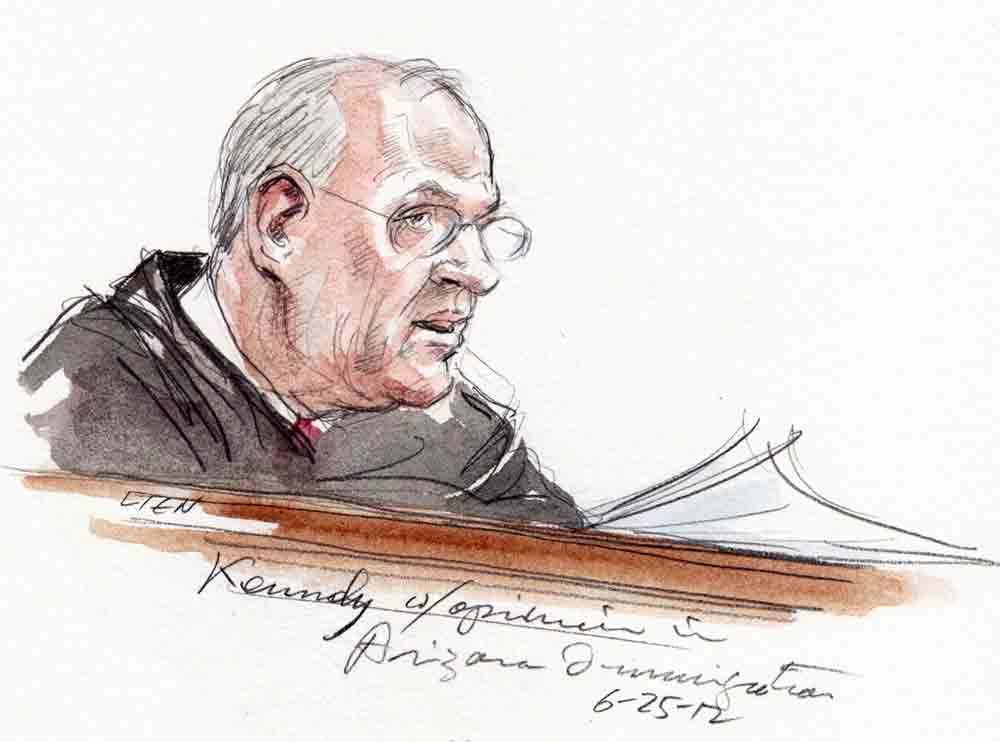 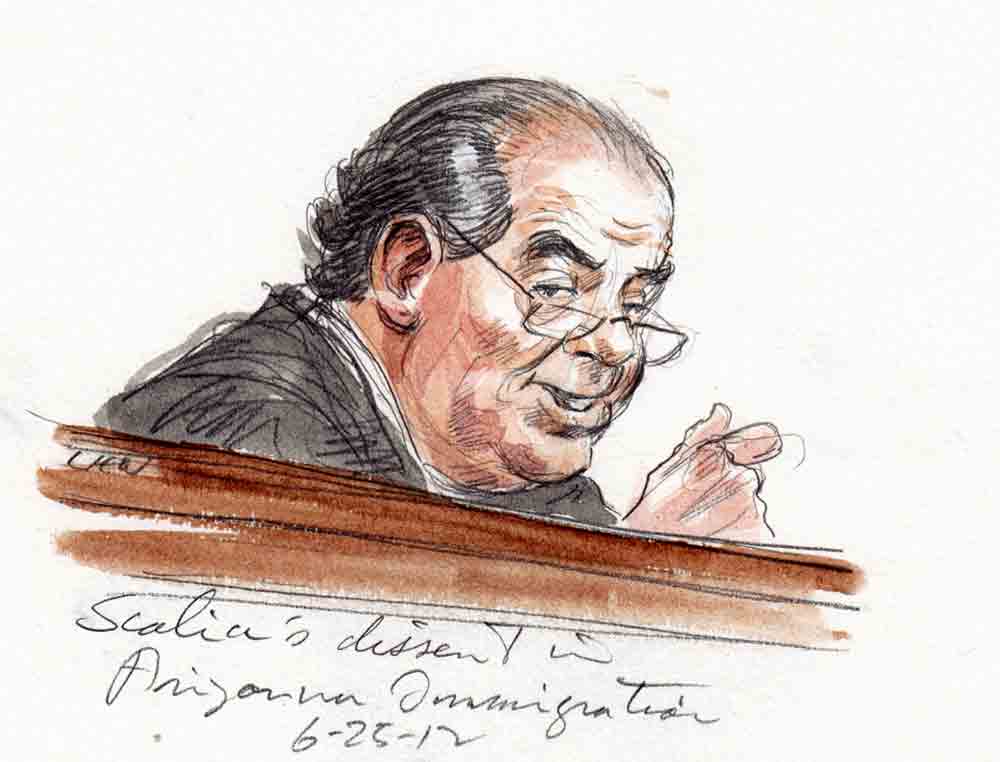 The Tucson Citizen has the story here.

This Land Is (Not) Your Land

Things just kept getting better for Arizona governor Jan Brewer, in the right foreground above, and the state’s mean-spirited anti-immigration law, SB 1070, especially when the Chief Justice cut off Solicitor General Verrilli before he could even begin his argument saying, “No part of your argument has to do with racial or ethnic profiling, does it?” Which, of course, is the elephant in the room.

When Verrilli later in his argument sought to illustrate the harrasment of legal Latinos by citing population percentages Scalia interjected, “Sounds like racial profiling to me”.

The lawyer for Arizona, Paul Clement, on the other hand faced moderate questions from the Justices as he sought to soften the edges of a harsh law. 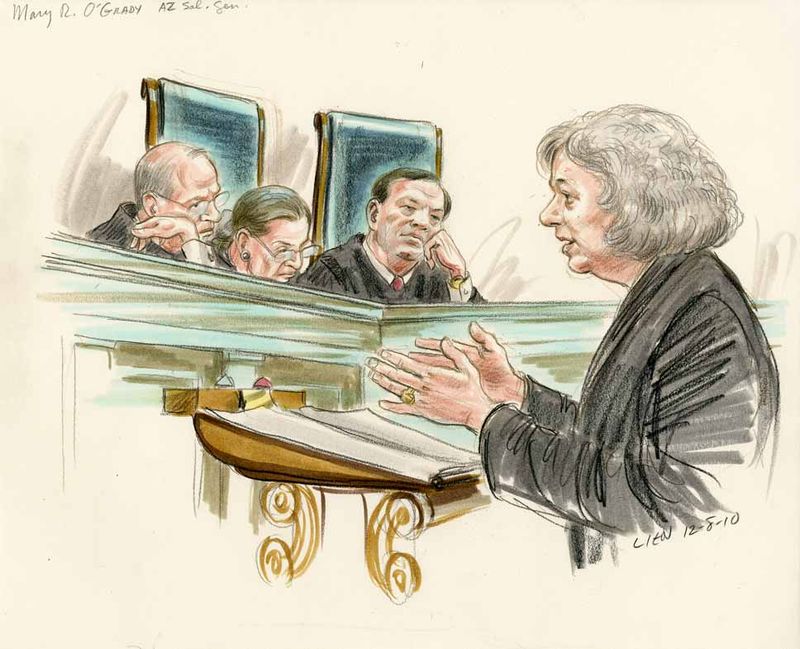 Started out the day at the Supreme Court sketching arguments on an Arizona law that punishes employers of illegal immigrants.  Pictured above is Arizona’s Solicitor General Mary O’Grady. 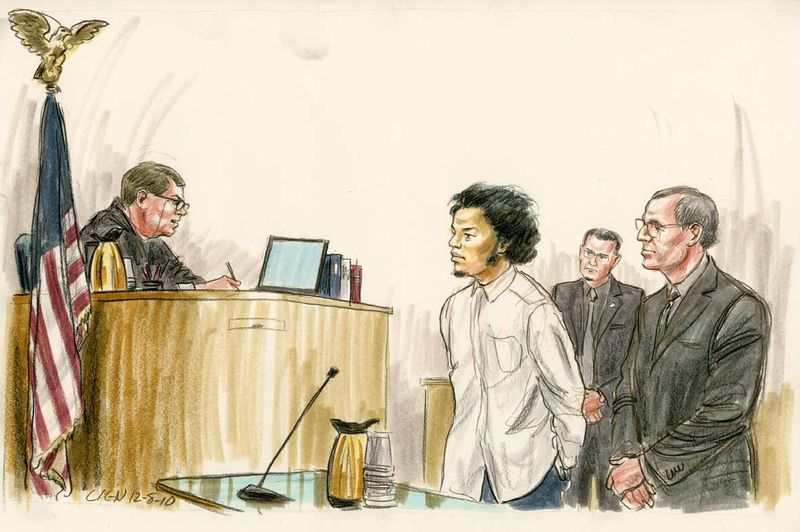 Then on to U.S. District Court in Baltimore for the initial appearance of yet another young man roped in by FBI agents posing as terrorists.  Antonio Martinez, aka Muhammad Hussain is said to have attempted to detonate what he thought was a bomb at a military recruitment center in Catonsville, MD.