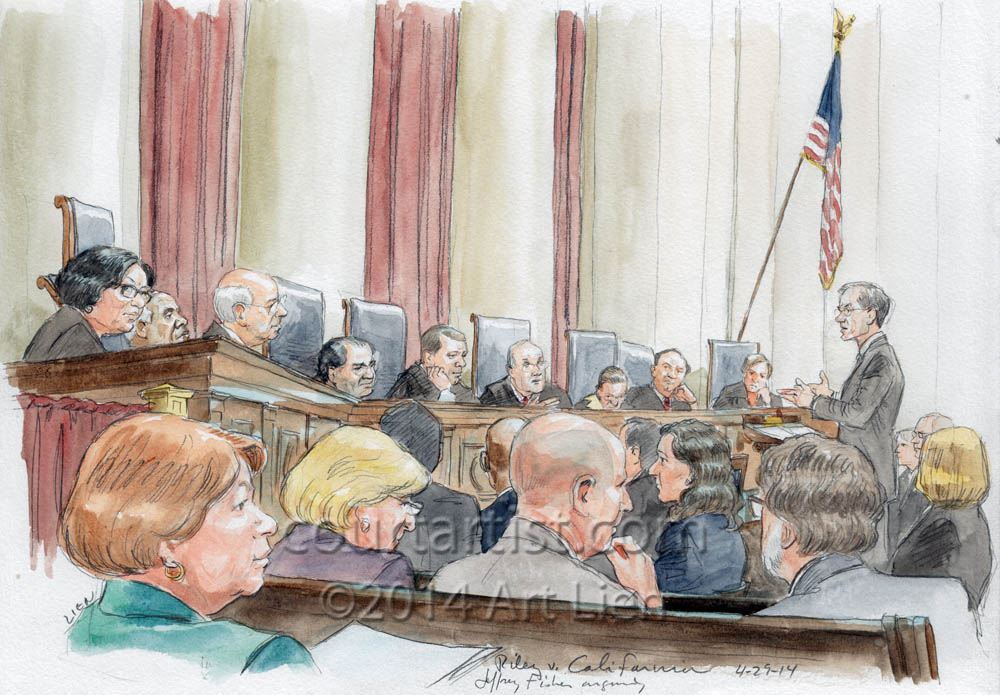 The Supreme Court today heard arguments in two cases concerning warrantless searches of cell phones. The old rules about searching belongings and the immediate area in the course of an arrest need to be reassessed now that most people carry a great deal of information around on their smartphones.

Lyle Denniston’s argument recap is here. The rest of my sketches are posted below. 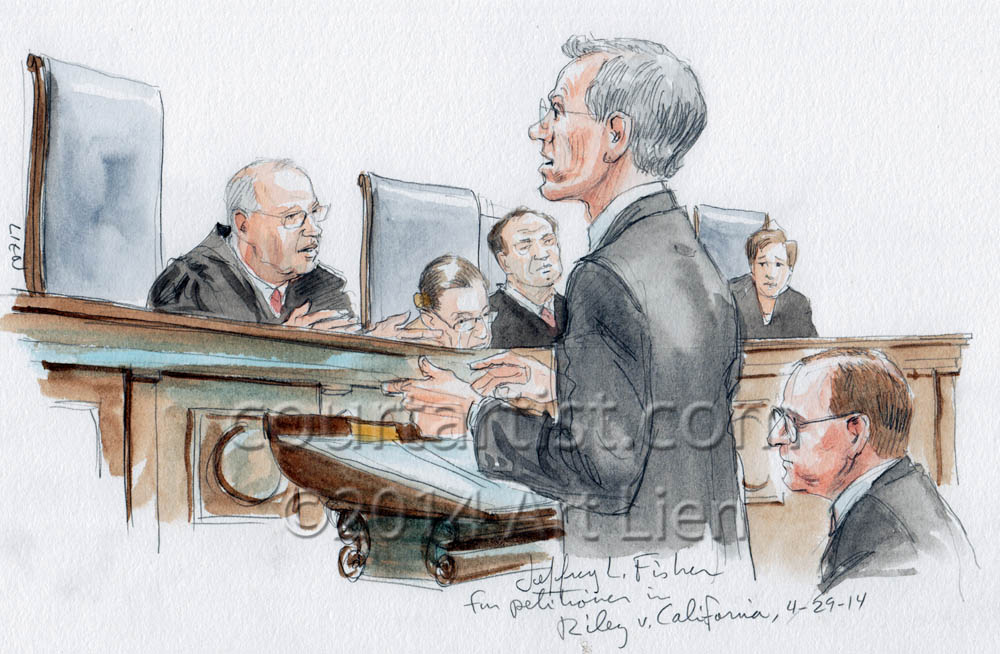 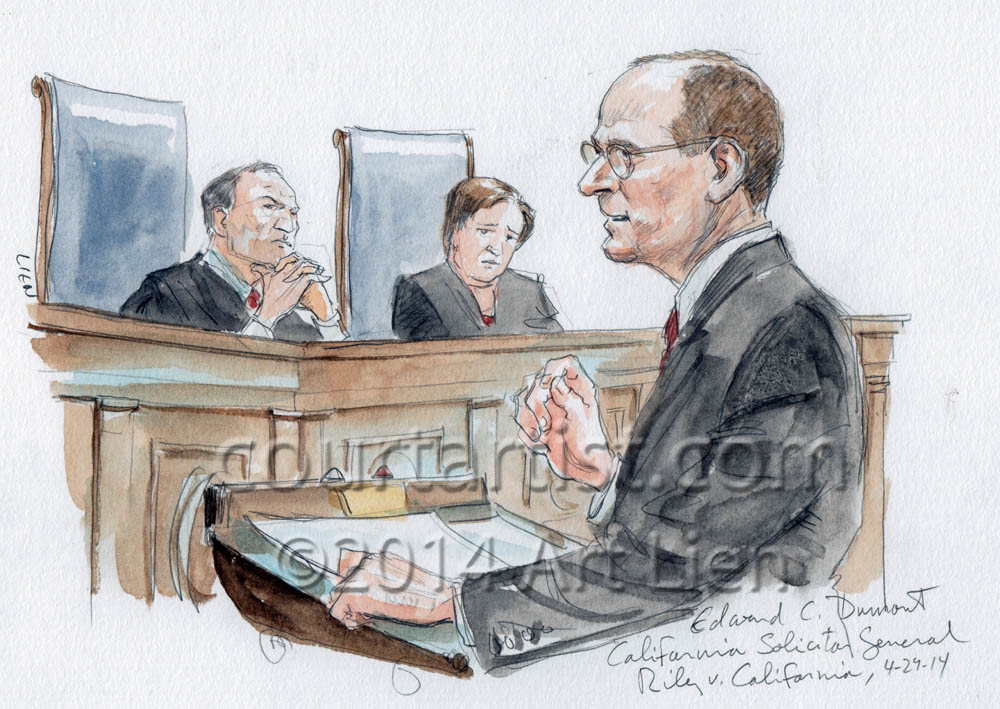 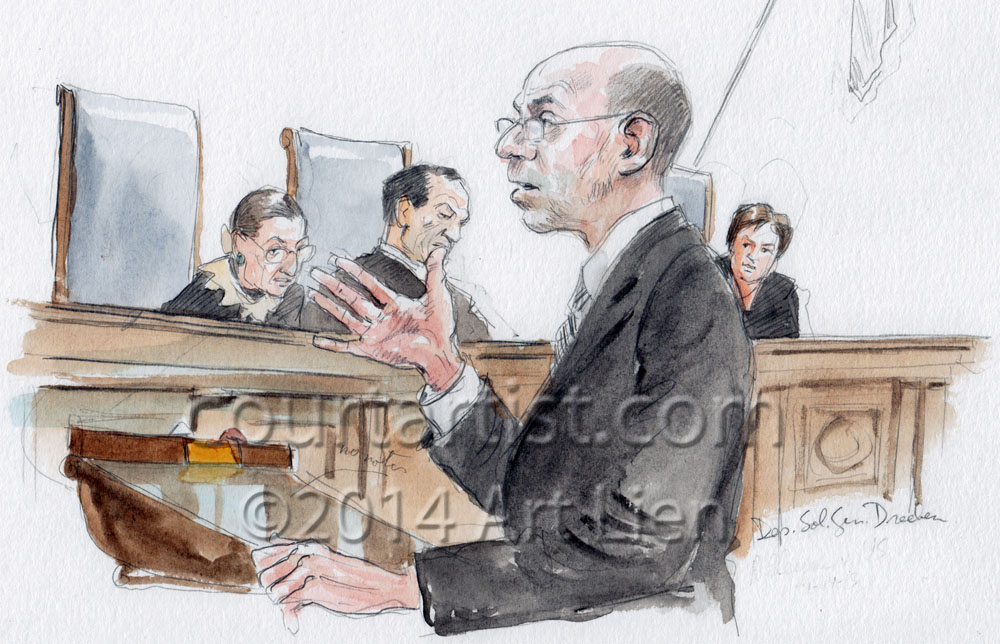 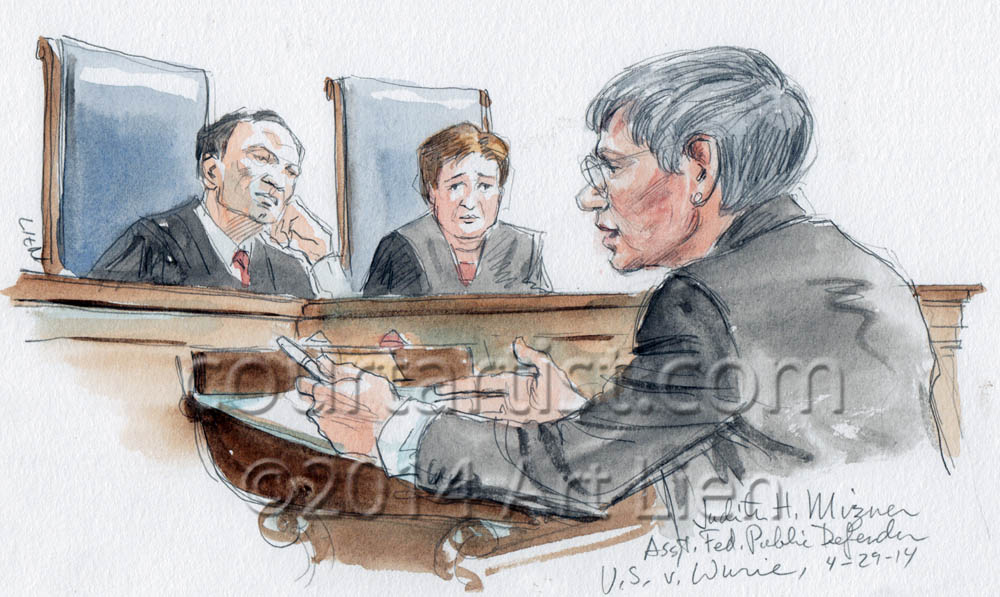 Gambling on Nevada Venue Not a Sure Thing

When professional gamblers Gina Fiore and Keith Gipson passed through the Atlanta airport on their way home to Nevada after a gambling trip to Puerto Rico a search of their bags turned up $97,000 in cash. The DEA was contacted and Fiore and Gipson were detained for questioning. They told Anthony Walden, a local police officer deputized as DEA agent, that they learned the cash legitimately at the gambling tables. Nevertheless the cash was seized and Walden told them that they would get it back once they provided proper documentation. 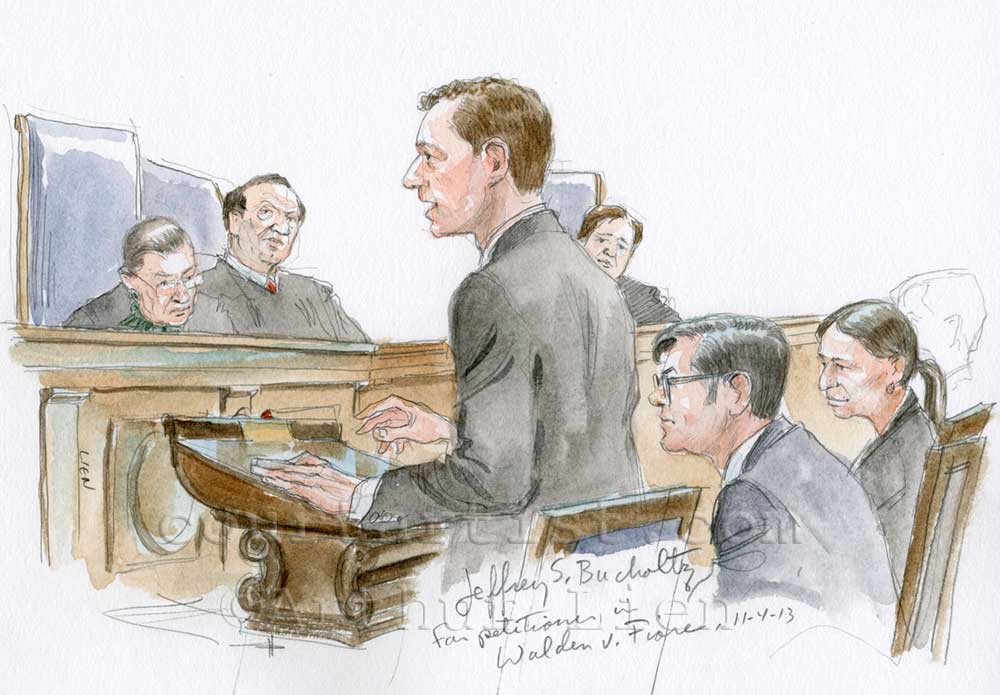 Upon their return to Las Vegas they sent the necessary documentation, but the DEA continued to hold on to the cash based on a questionable affidavit drafted by Walden. Eventually the money was returned and the gamblers filed a lawsuit against officer Walden in Nevada federal court.

The question before the Supreme Court at Monday’s argument in Walden v. Fiore is whether the court in Nevada has jurisdiction over an officer doing his job in Georgia and where should the case be tried. The above sketch shows Walden’s lawyer, Jeffrey S. Bucholtz, arguing that the case belongs in Georgia. 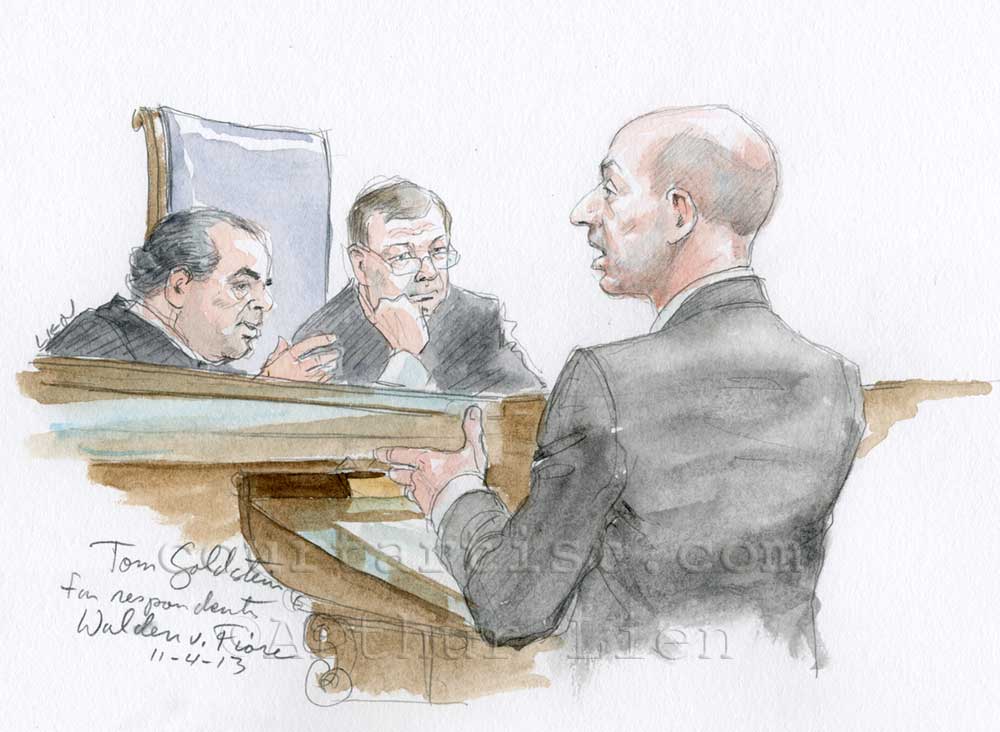 Tom Goldstein, on the other hand, argued that the injury occurred in Nevada and, as the Ninth Circuit concluded, should be tried there. He concluded by warning, “. . . if that’s not enough, you are closing the door absolutely to all internet cases . . . where someone sits at the computer and targets someone in another State.

How far can the police go in procuring a warrant based on an affidavit “so lacking in indicia of probable cause” that the resulting search not only violates the Fourth Amendment, but exposes the officer to civil action? Beats me. 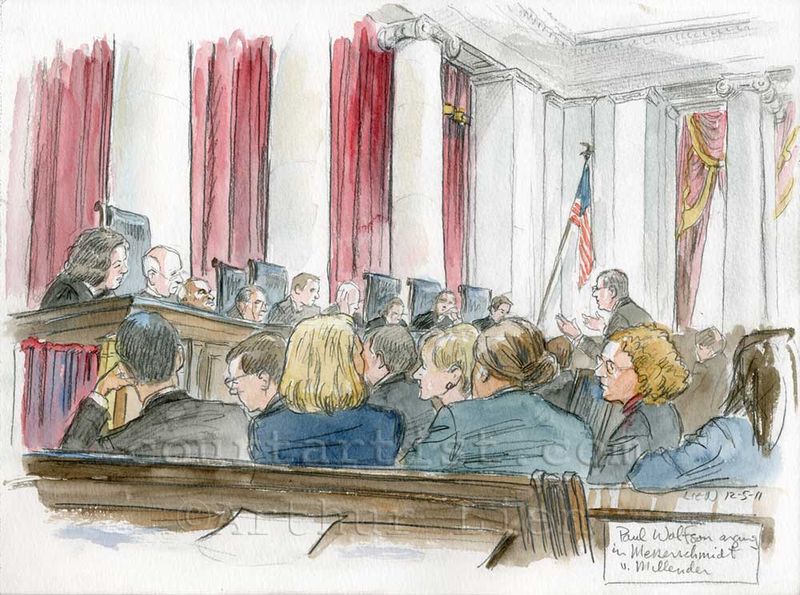 I wasn’t in court to cover the story, but rather to try out a new combination of sketching media. Here’s what I came away with. 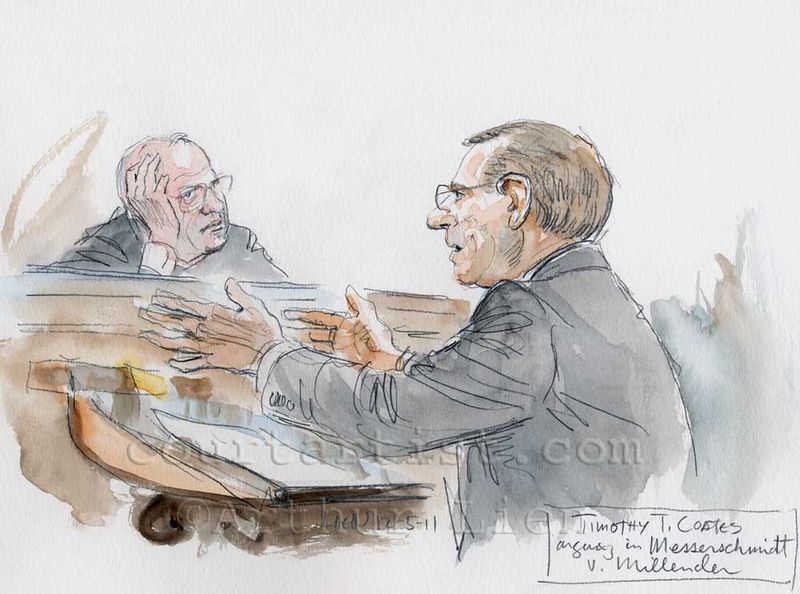 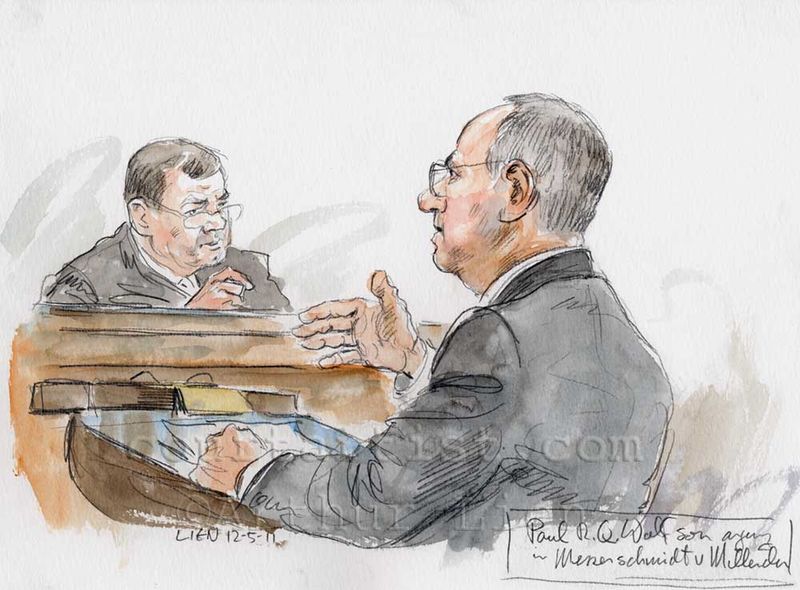 This was not the usual audience of spectators. I don’t think they had anything to do with the cases being argued, and in fact they looked a little bored.

The case is Messerschmidt v. Millender.