Black Aggie and the Doomsday Binder 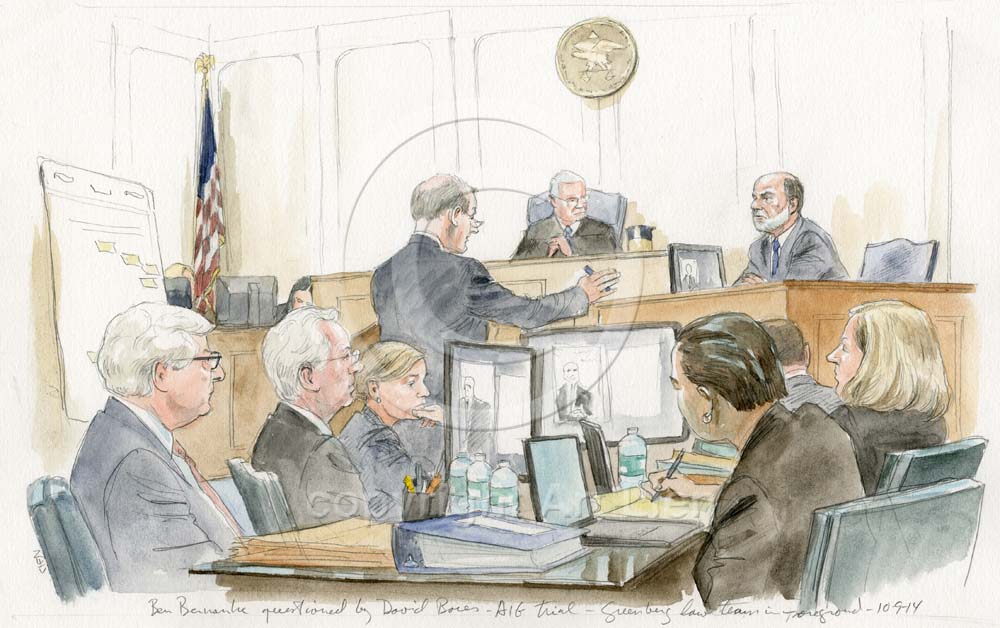 I didn’t expect to have much fun covering two days of a trial relating to the government’s 2008 bailout of AIG, but I was mistaken.

It was fascinating to hear former Fed. chairman Bernanke describe the near financial collapse as more severe than the great depression of the 1930’s, and that there exists a “doomsday book”, a collection of emergency documents and memoranda outlining the central bank’s powers, that Timothy Geithner carried around in a 2-inch binder. 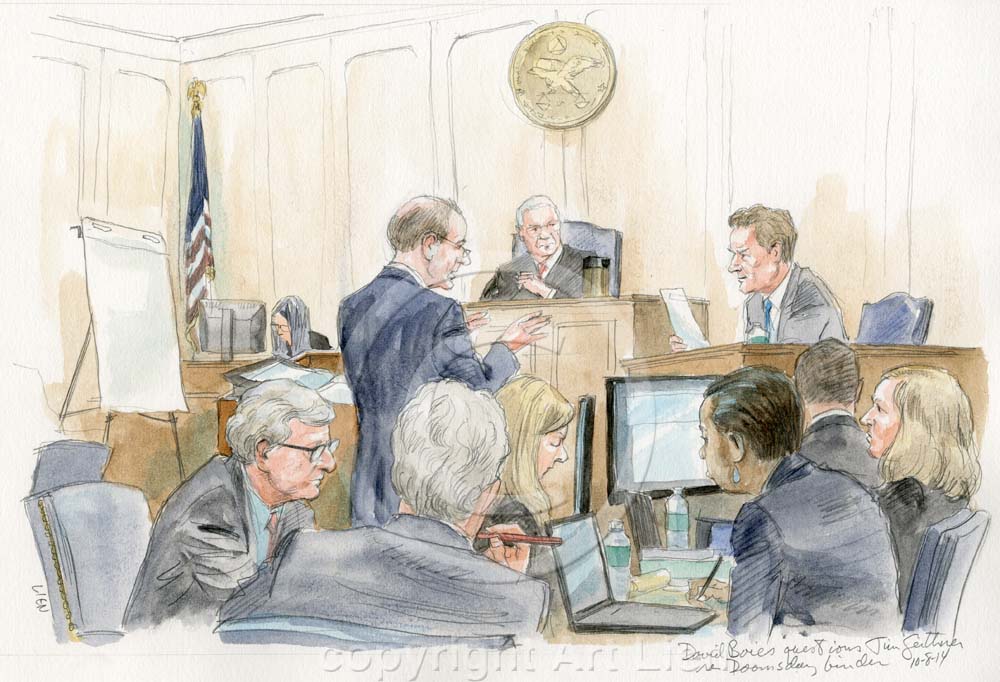 Even better was coming across the statue of Black Aggie in the courtyard of the building housing the Federal Circuit and Court of Federal Claims. Black Aggie used to reside at Druid Ridge cemetery in the Baltimore suburb of Pikesville. She sat over the tomb of Union Army general and publisher of the Baltimore American newspaper Felix Agnus until the mid 1960’s when the family gave the statue to the Smithsonian. For years Black Aggie was the subject of ghostly lore and attracted midnight visitors who trampled the gravesite to sit in her lap. 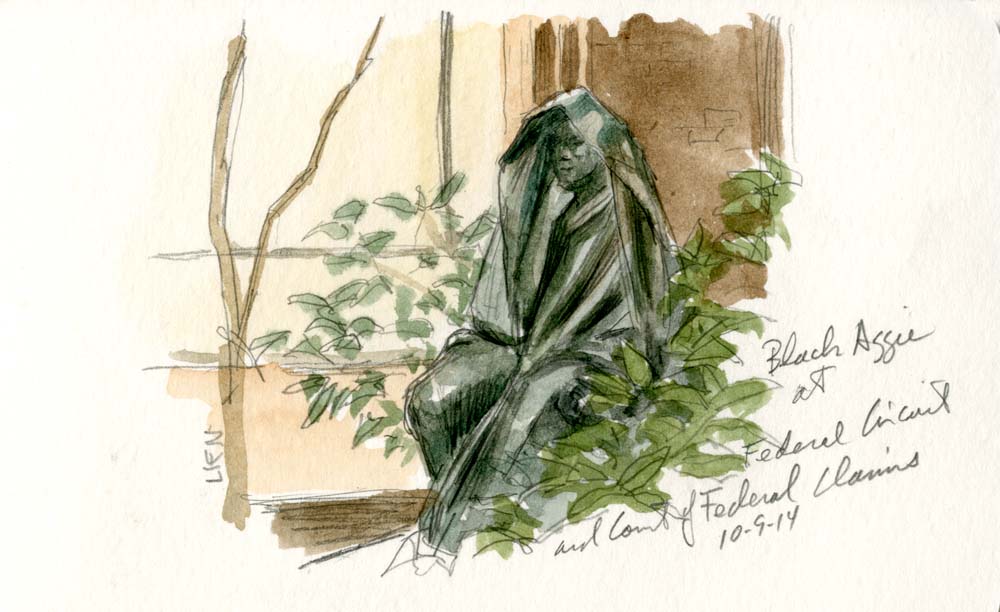 As forty-three year resident of Baltimore who loves his adopted city I can’t help feeling a little resentful at DC’s acquisition.

Back to the AIG trial, on the face of it this effort by Maurice “Hank” Greenberg to sue the government for saving AIG’s ass seems pretty preposterous. He doesn’t seem to acknowledge that the point of the bailout wasn’t to benefit AIG shareholders but to avoid the freezing of global insurance markets and financial meltdown. Greenberg’s legal team is led by super-lawyer David Boies, but I hope this is one time Boies loses. 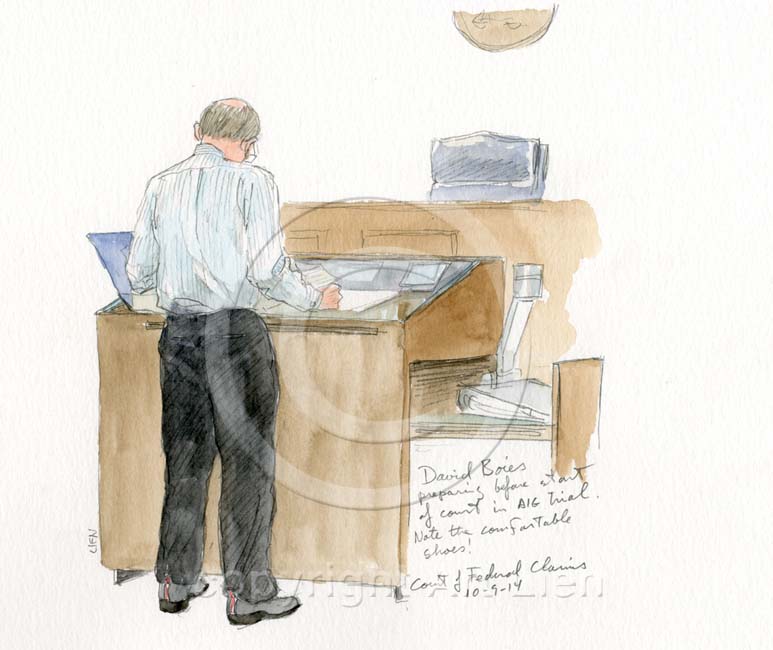 Here are the rest of my sketches from my two days at the Court of Federal Claims. Note in the unfinished sketch the shelves full of binders on each side of the courtroom. 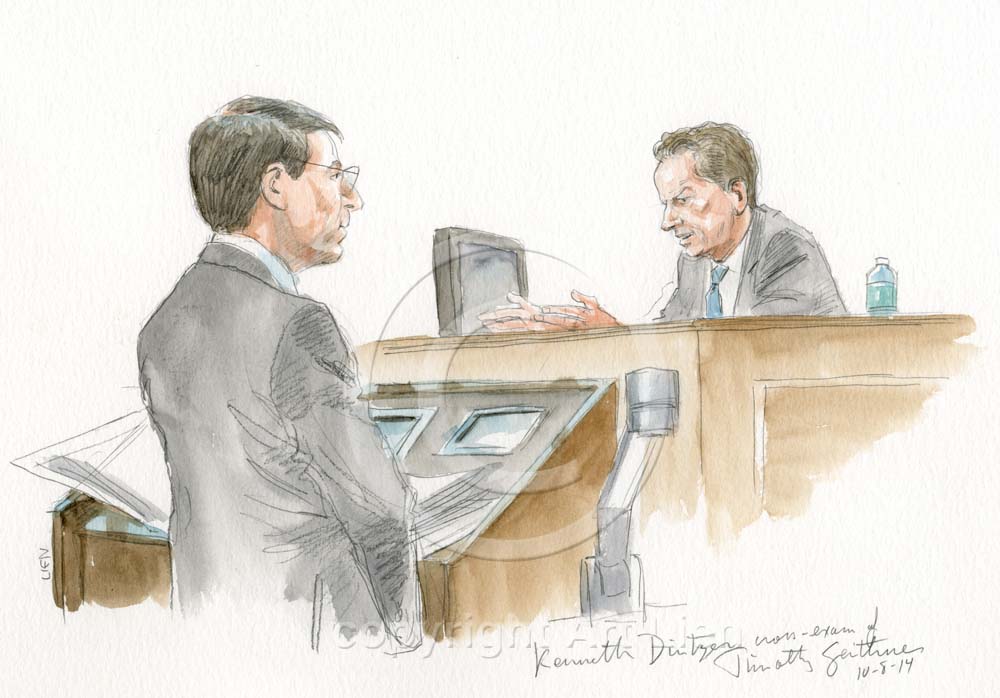 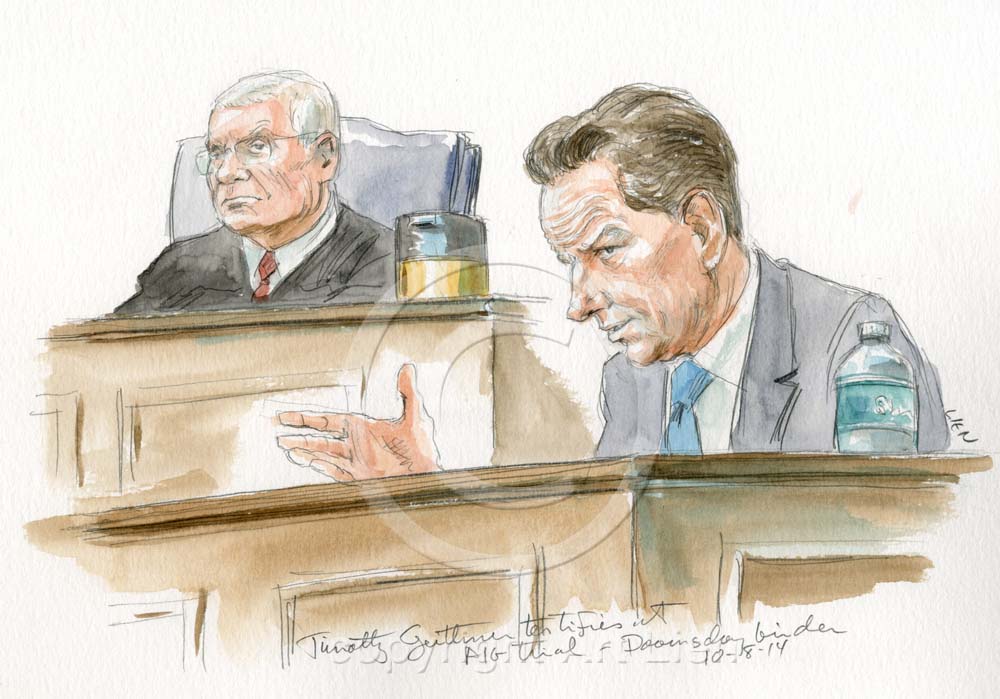 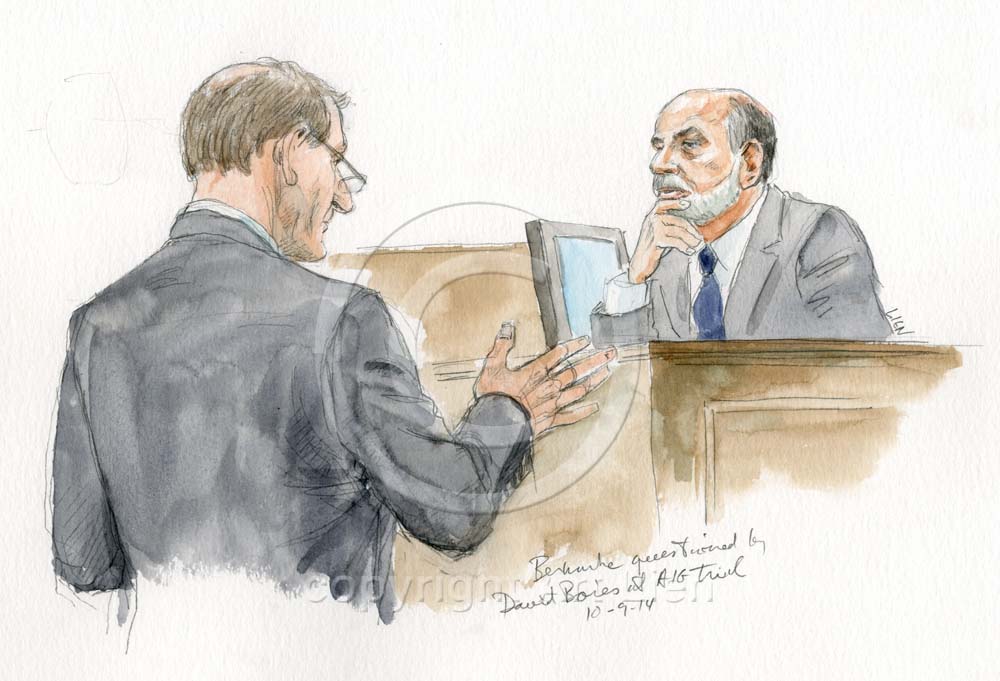 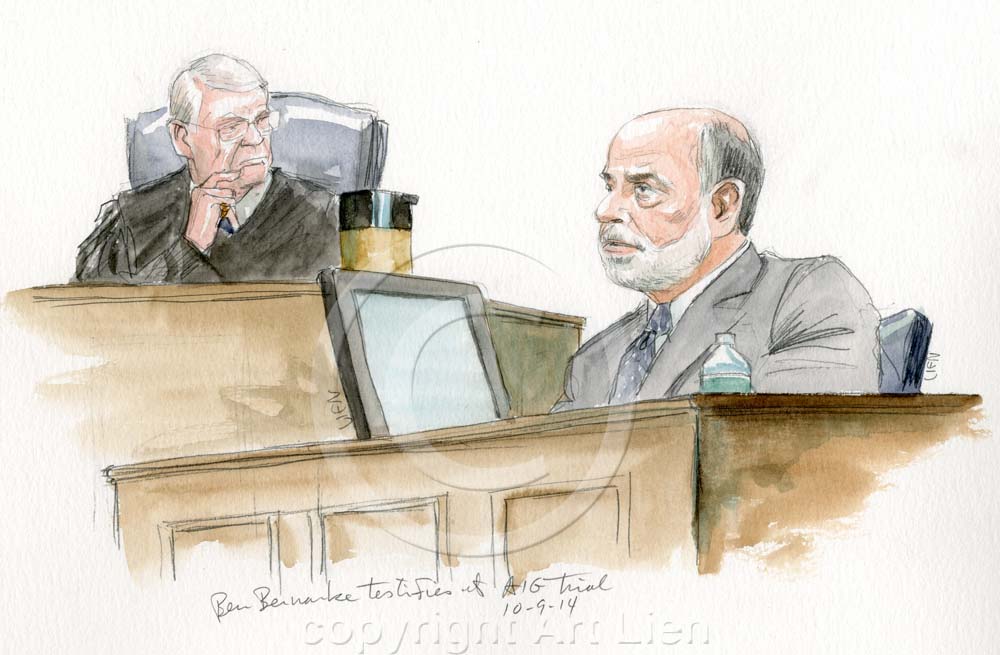 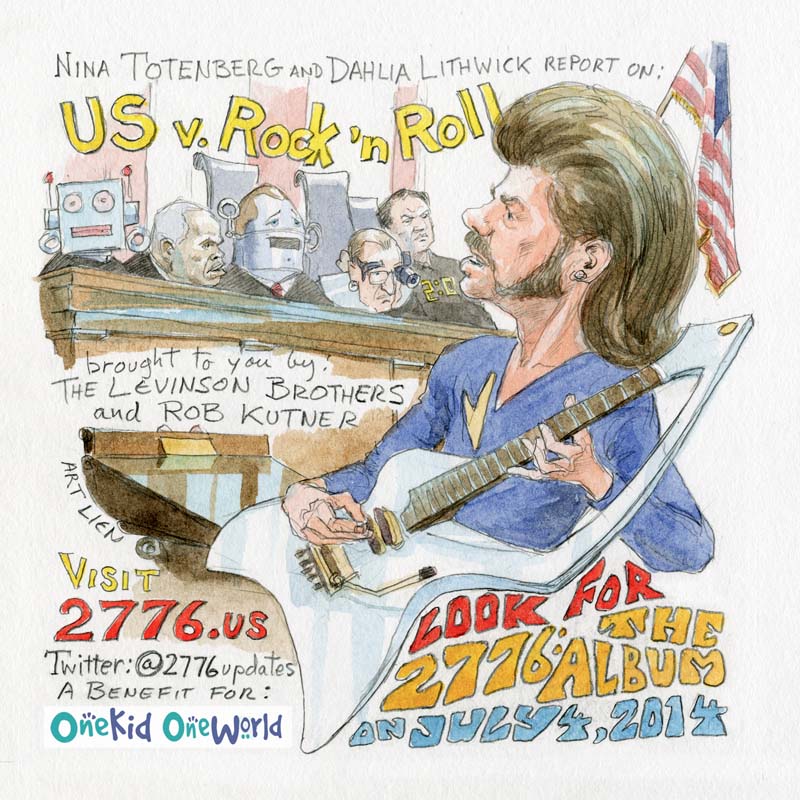 Professor Abraham and the Justices

Marcia Coyle had the idea for this drawing of UVa professor Henry J. Abraham and the eight chief justices who served during his lifetime, so far (Abraham is 92). 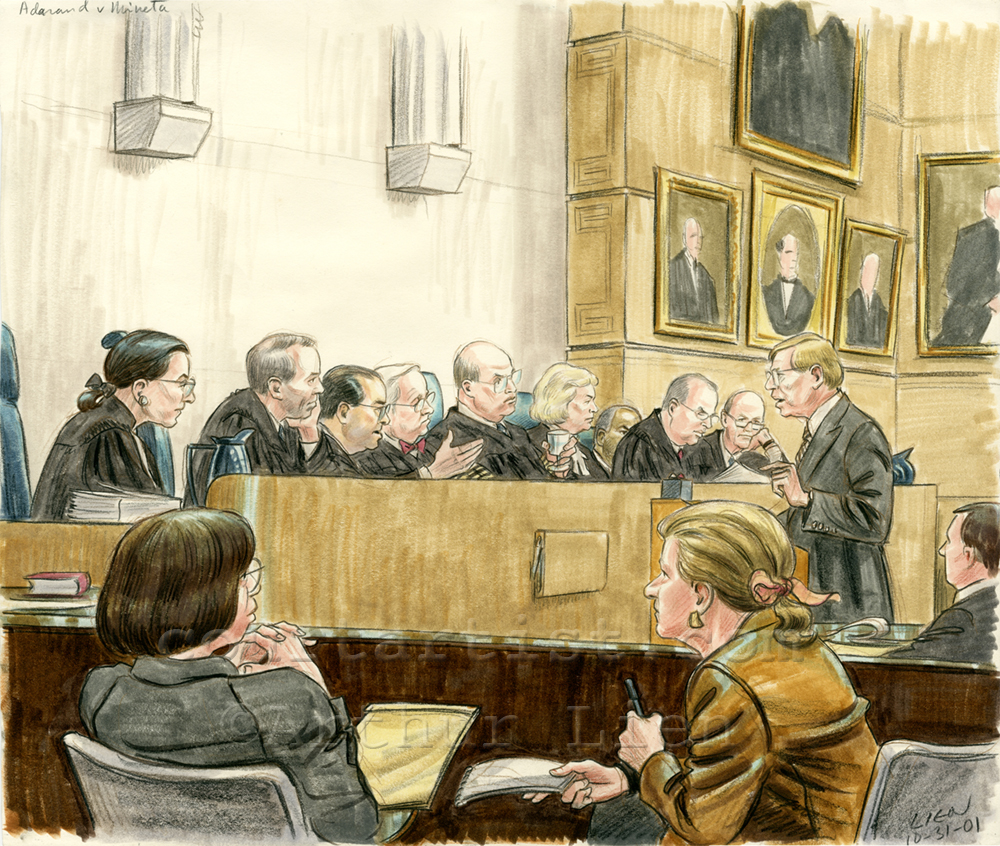 McMahon’s Drawings of the Emmett Till Murder Trial 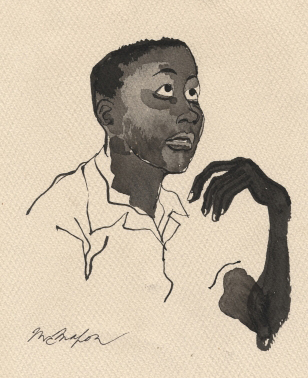 The blog Today’s Inspiration this week posted a fascinating 1968 Famous Artists Magazine interview with artist-reporter Franklin McMahon who died last March. It is worth a read. McMahon was one of the greatest practitioners of visual journalism. He knew how to find a story and sell it to editors. As far as I know the only trial he covered was the 1955 trial for the murder of Emmett Till. The images posted here are from that trial. 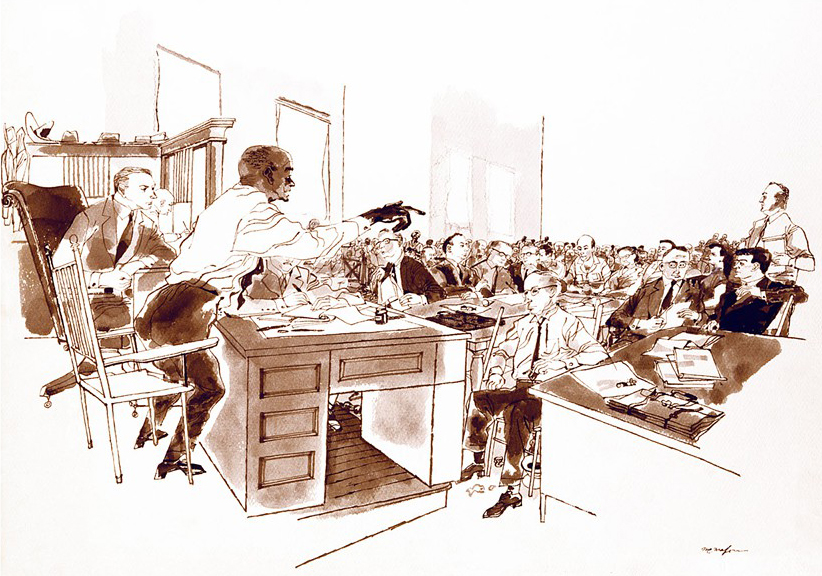 This is McMahon’s sketch of Till’s uncle, Mose Wright, pointing to one of the defendants in the courtroom. 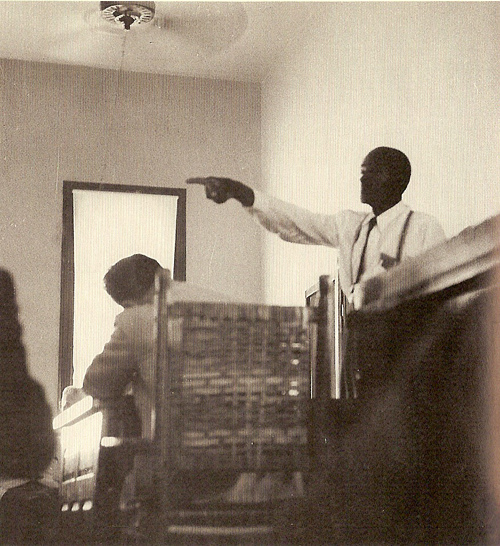 And this is the same moment serruptitiously captured from a different angle by photographer Ernest Withers. 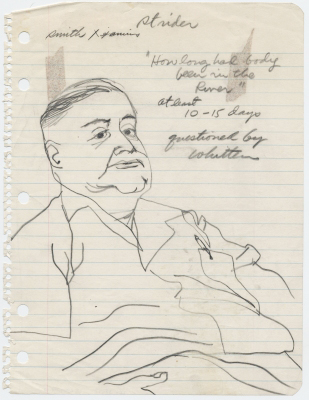 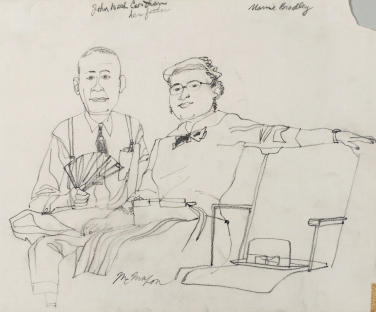 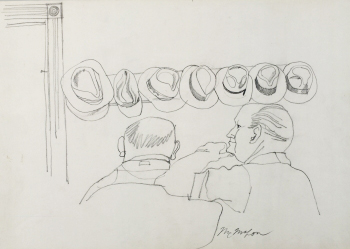 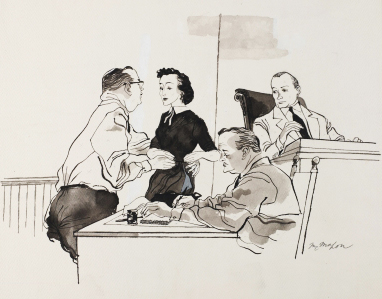 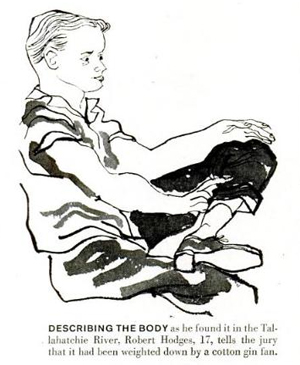 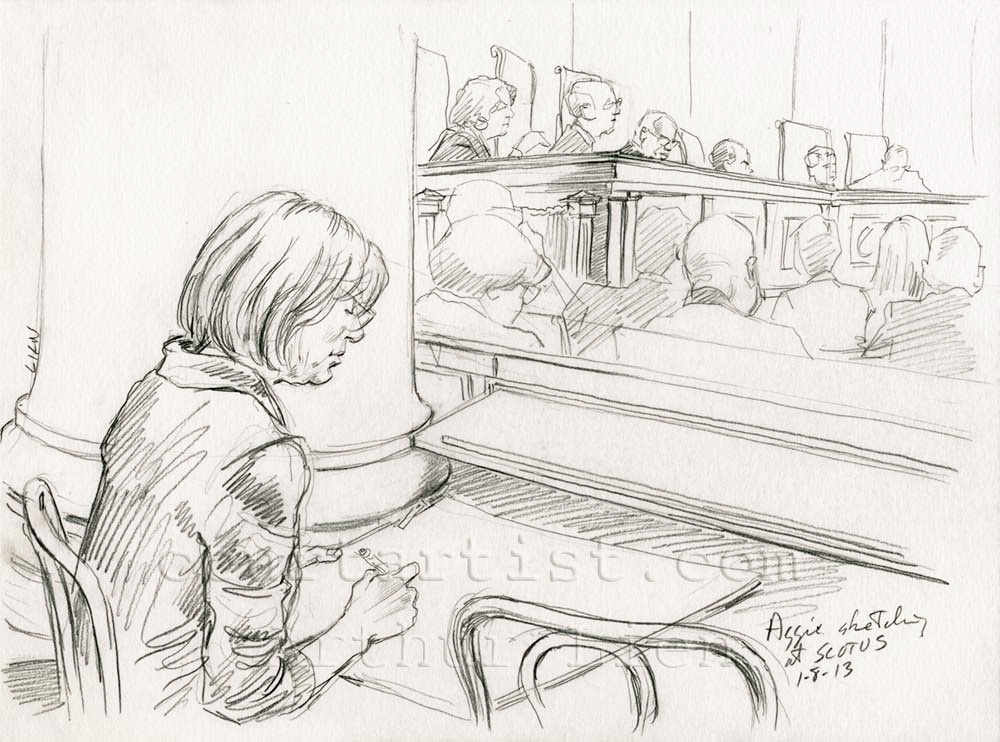 One of the sketch artists I most admire, Aggie Whalen Kenny, was visiting the Supreme Court this week. Aggie used to sketch the Court regularly for ABC and CBS back when I was still wet behind the ears. Now if only Don Juhlin would show up!

Oh, in case you were wondering, she’s sketching the riveting arguments in Gabelli v. SEC.