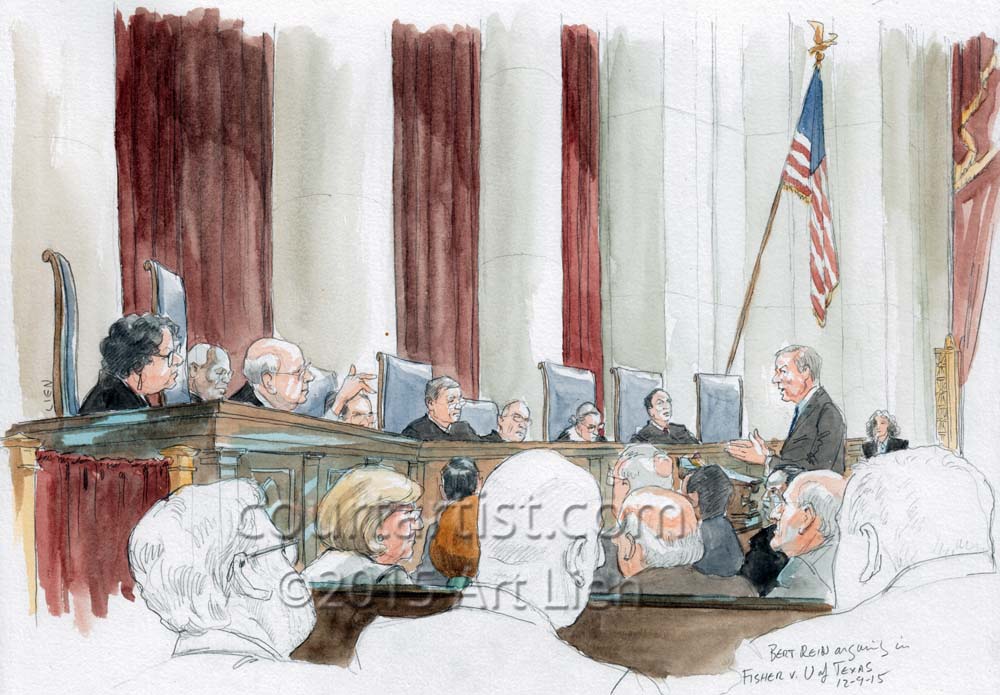 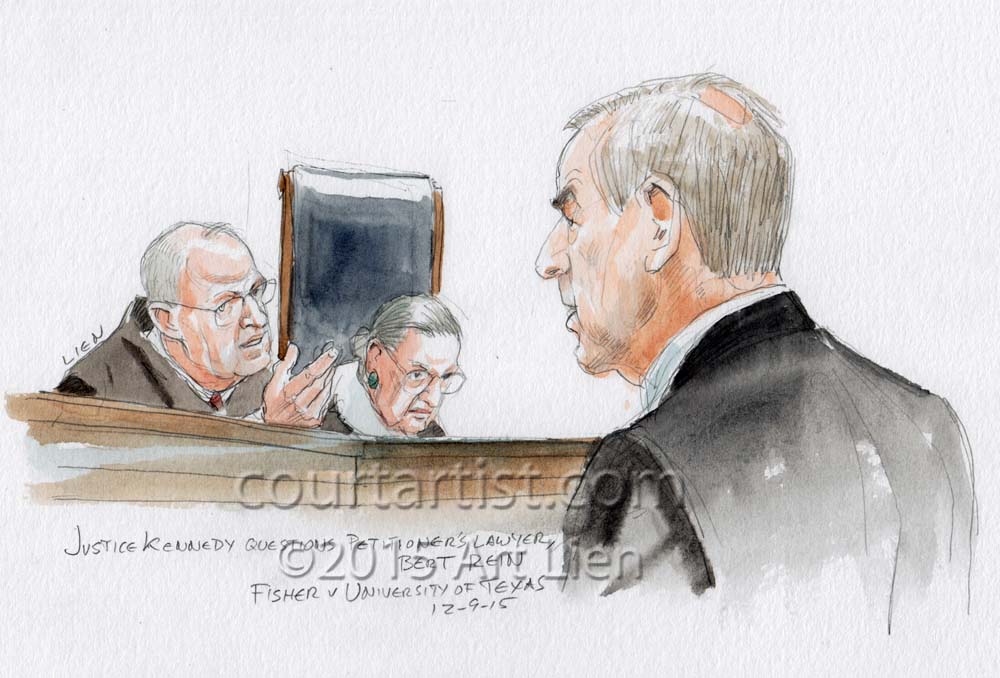 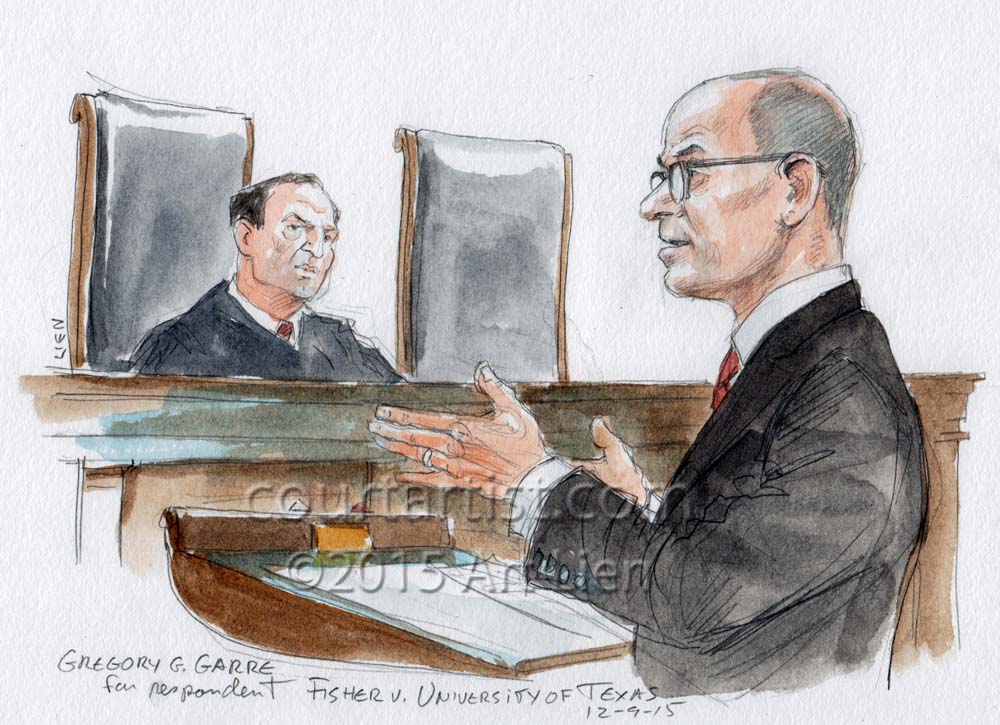 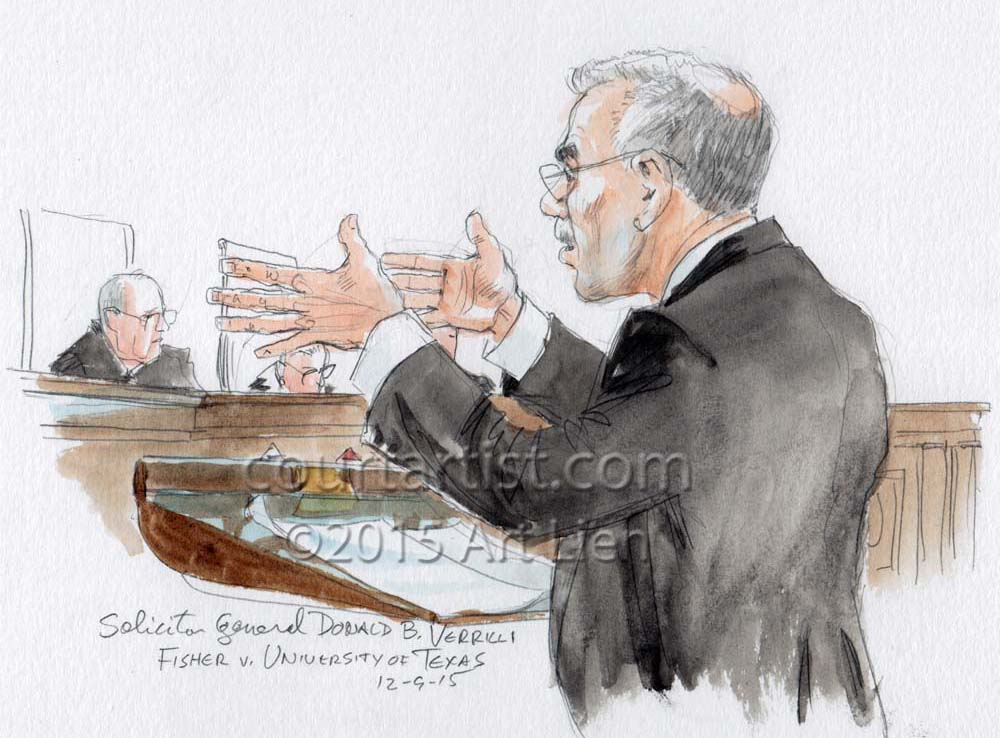 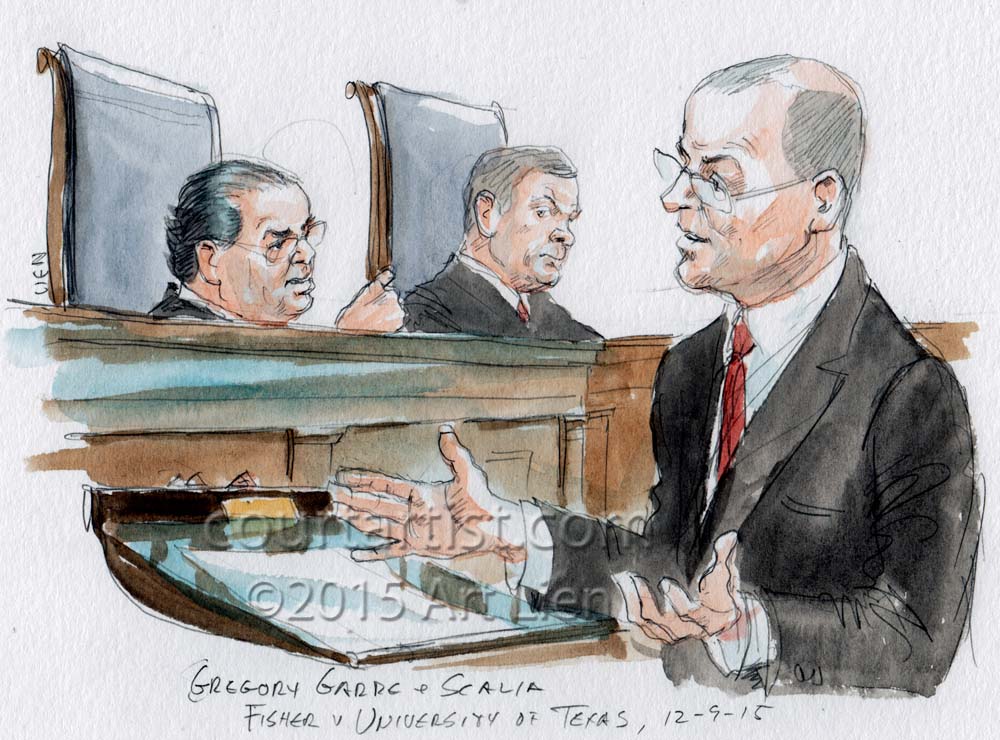 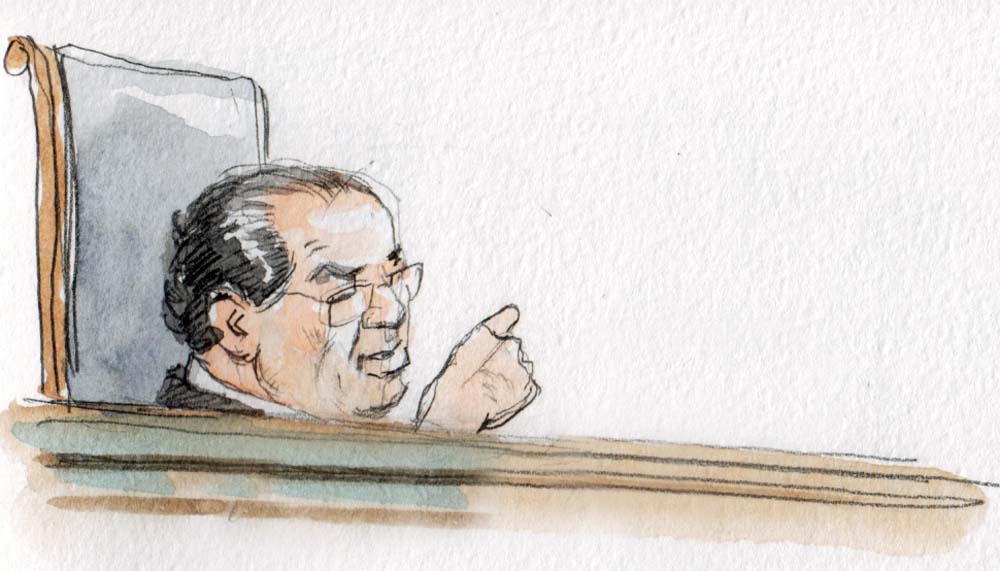 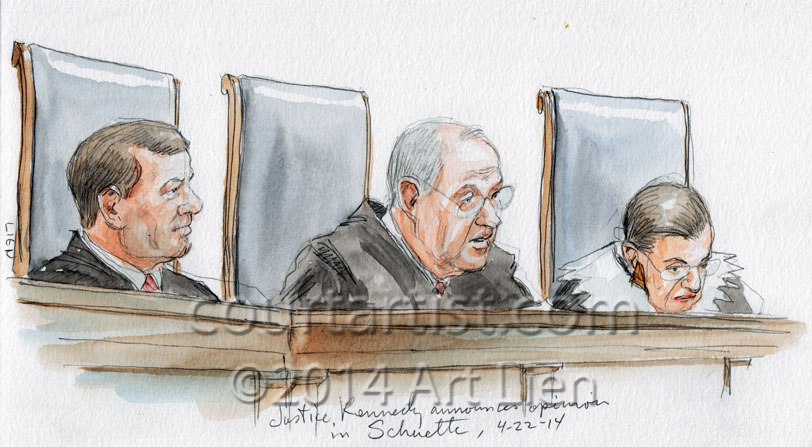 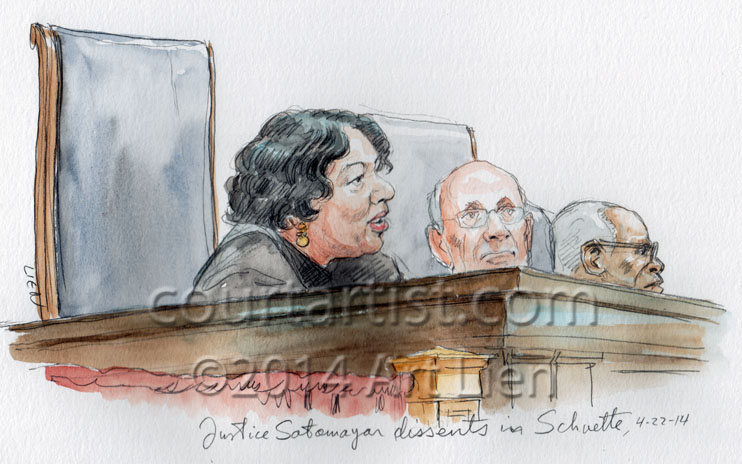 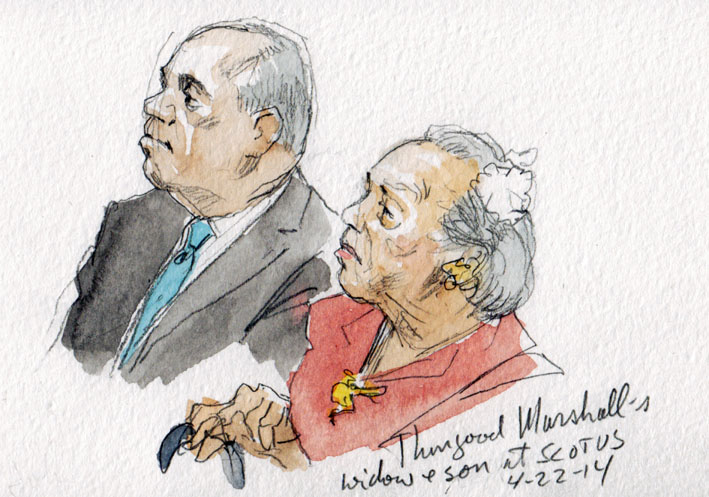 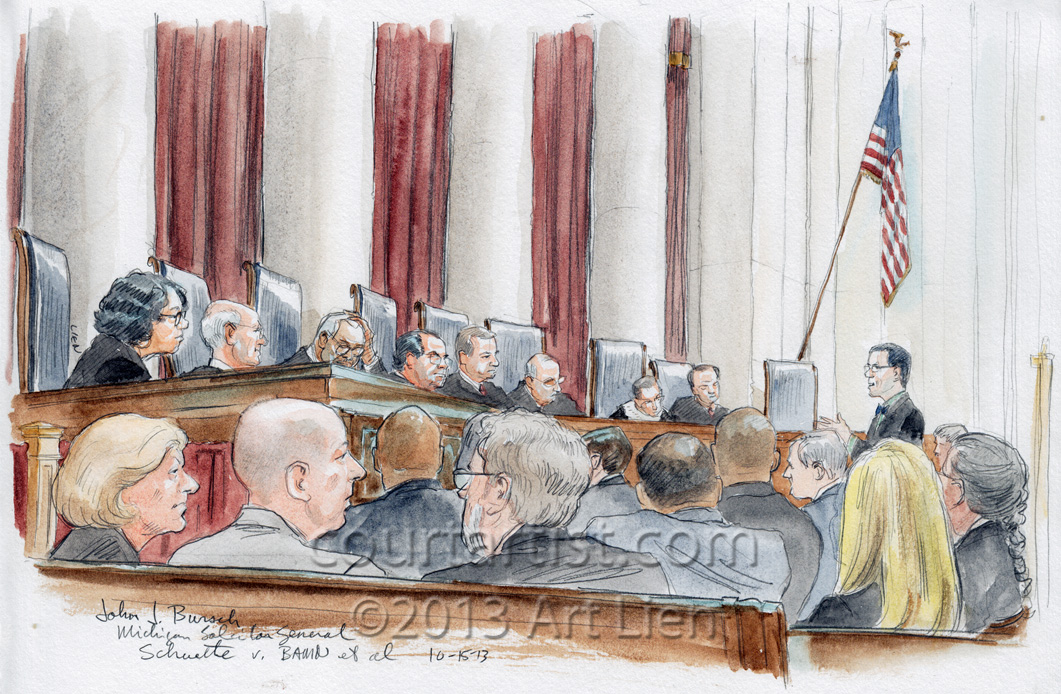 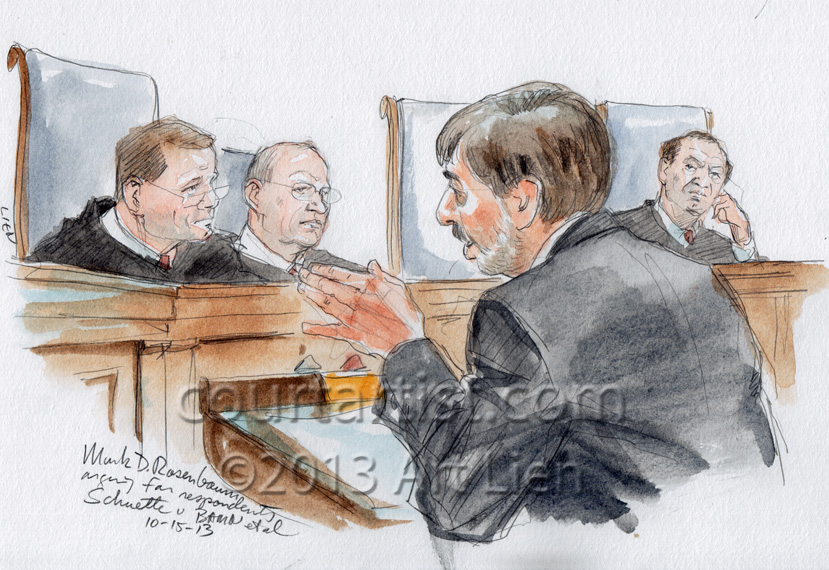 The Supreme Court this afternoon heard arguments on Michigan’s “Proposal 2”, a voter-approved law that forbids the use of race in college admissions, as well as public employment and contracting. The case is Schuette v. Coalition to Defend Affirmative Action (note that I’ve labeled my drawings “Schuette v. BAMN” because it’s shorter. BAMN stands for “By Any Means Necessary”, and comes from the challenger’s full title, Coalition to Defend Affirmative Action, Integration and Immigration Rights and Fight for Equality By Any Means Necessary). But enough from me. Here are the sketches. 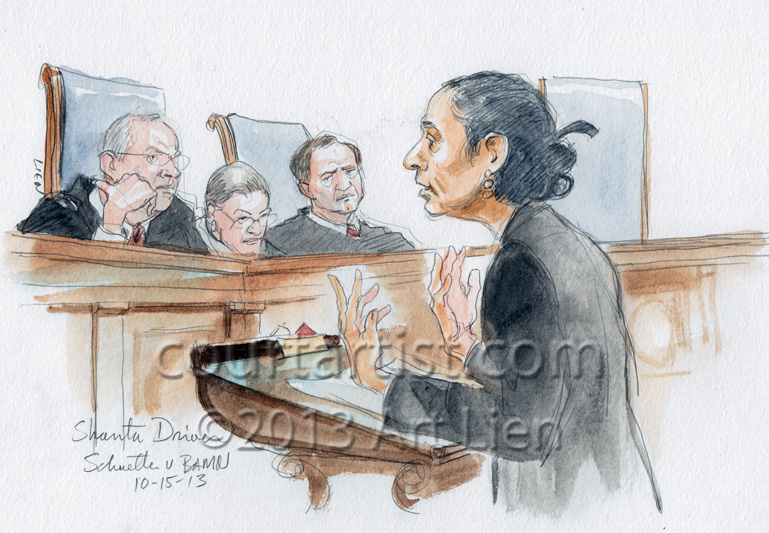 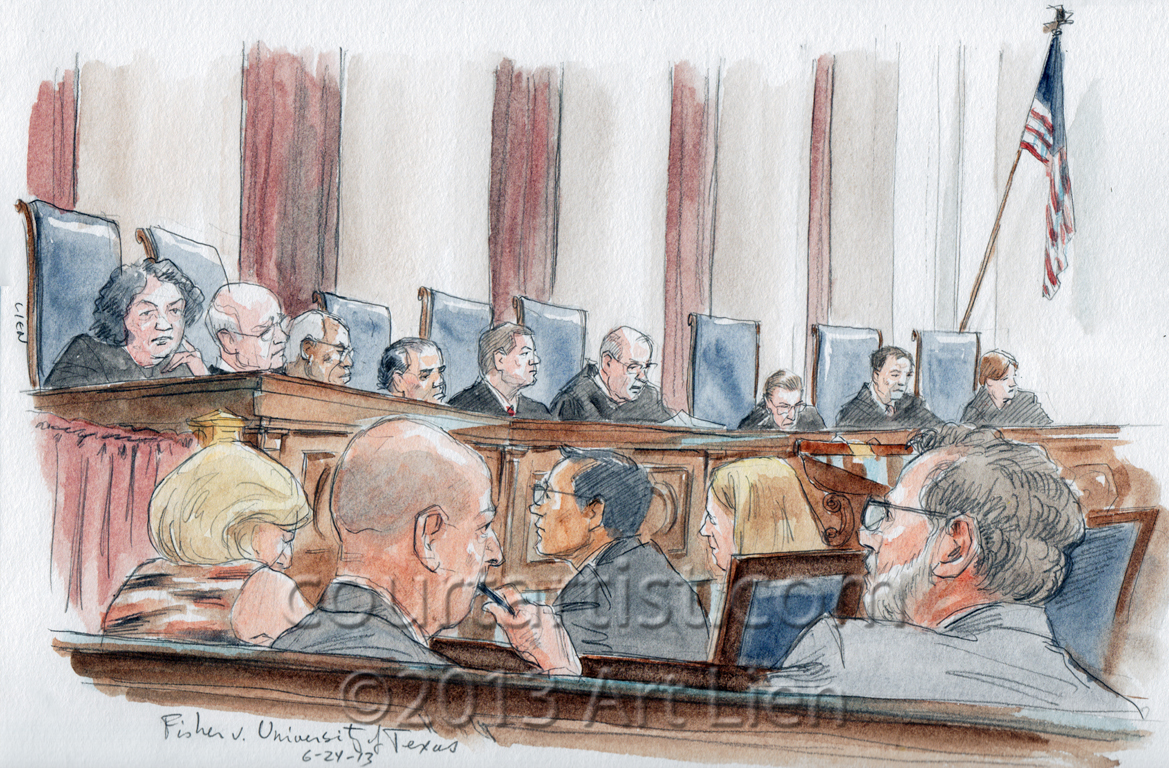 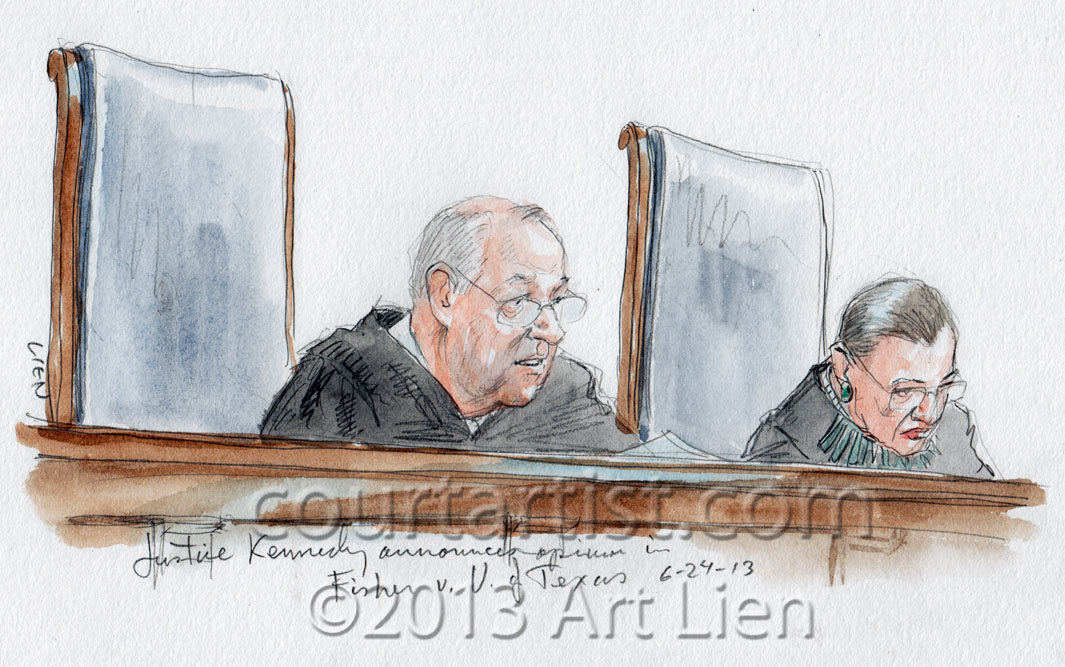 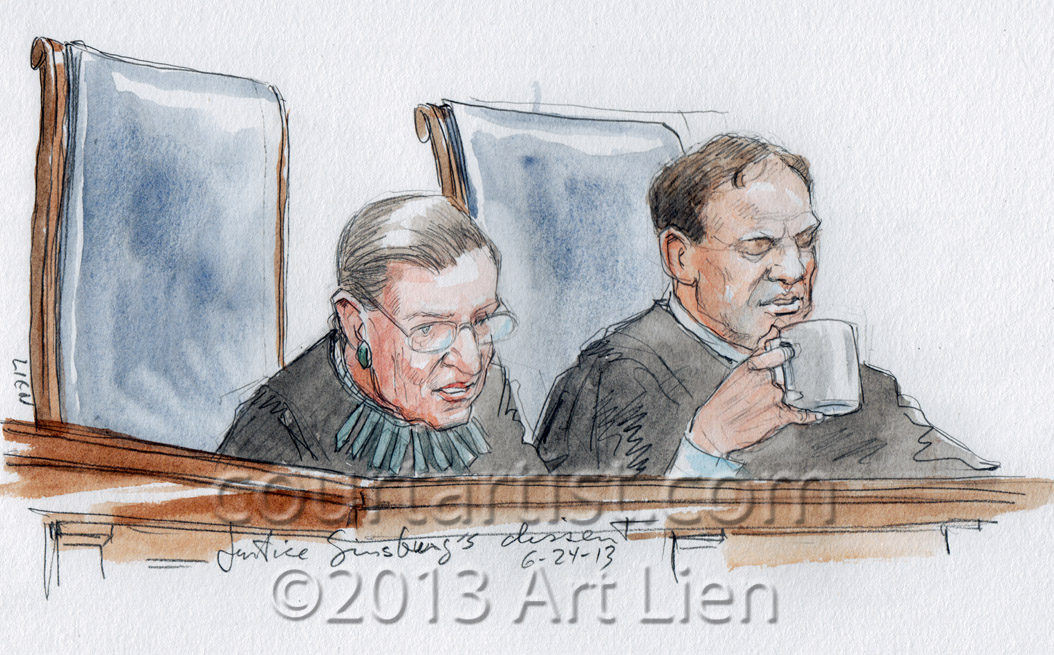 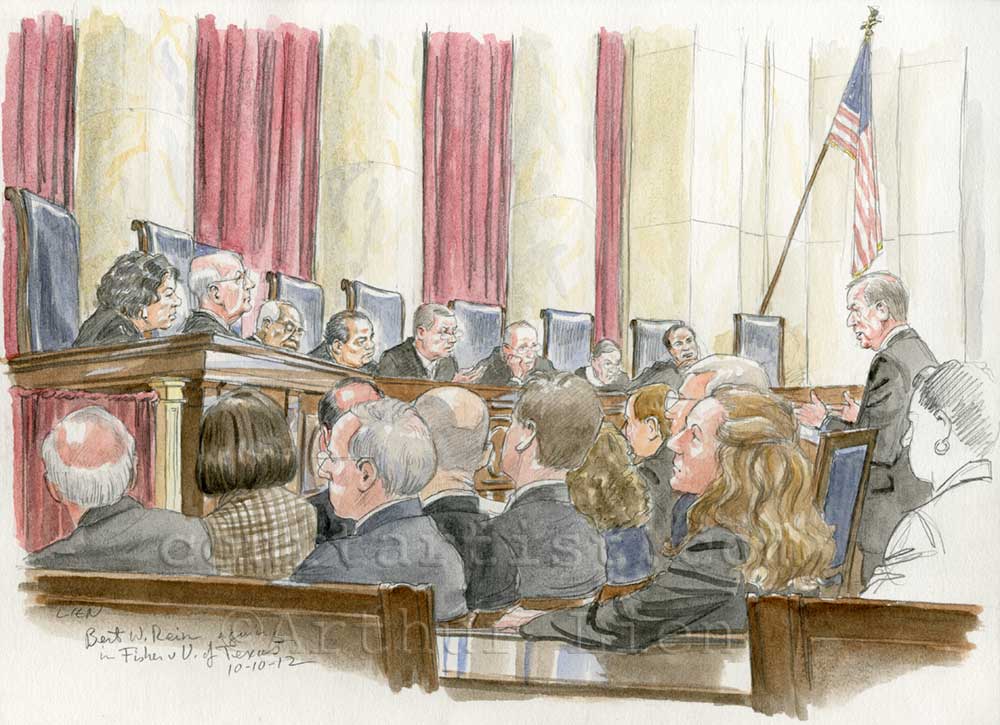 Nine years after deciding that race, though not quotas, could be considered in college admissions a new, somewhat more conservative Supreme Court is reconsidering affirmative action. The case against the University of Texas was brought by Abigail Fisher, a Texas high school student who says she was denied admission because of her race. 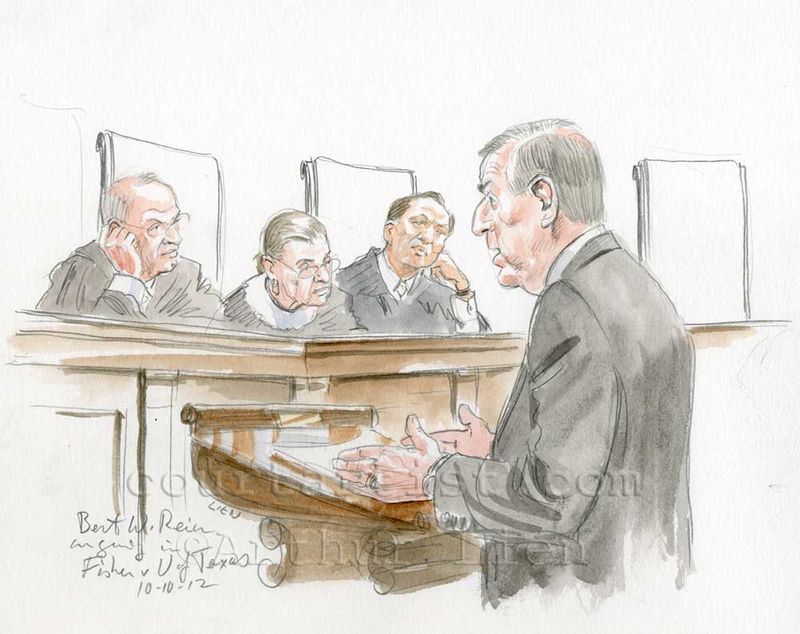 The first question for Fisher’s attorney, Bert W. Rein, came from Justice Ginsburg, who along with Justices Breyer and Sotomayor, is expected to uphold the Court’s earlier position on affirmative action in college admissions. Justice Kagan, whose empty chair can be seen on the right, is not taking part in the case. 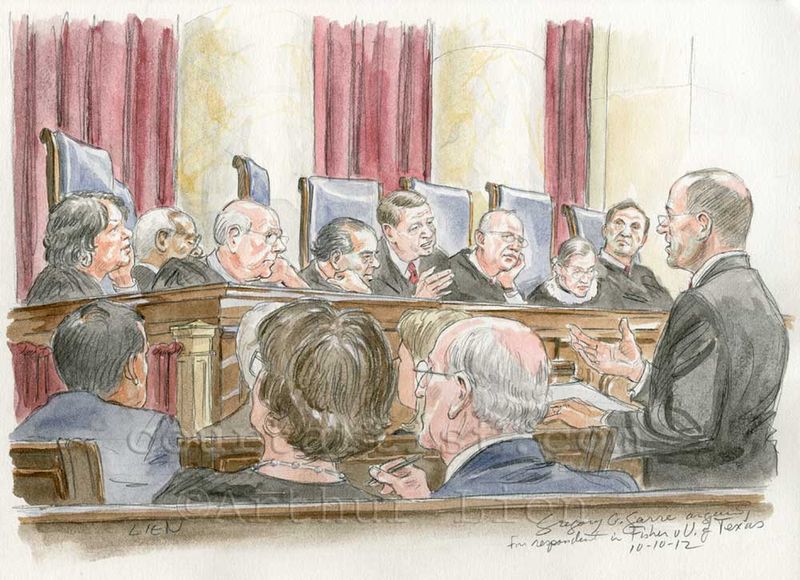 The more conservative members of the Court, who had been mostly silent during Rein’s argument, sprang into active questioning as Gregory Garre took the lectern to defend the university’s program. 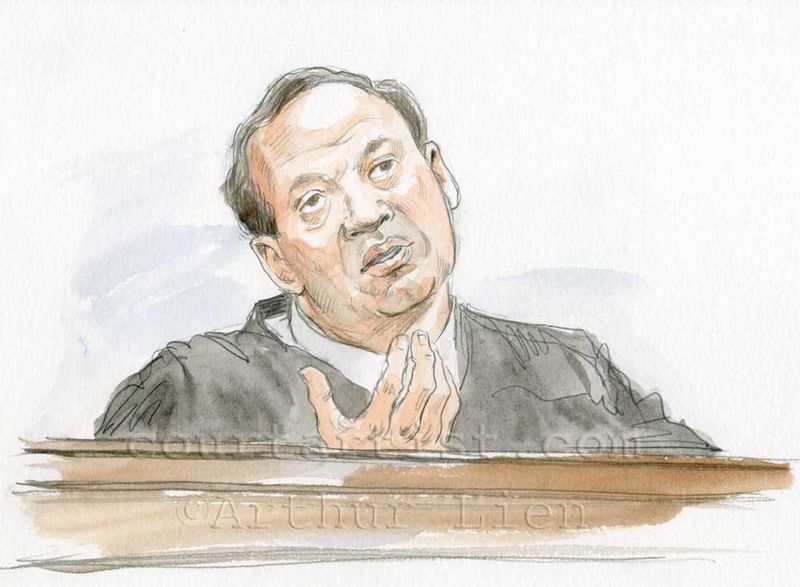 “But you say …it doesn’t admit enough African Americans and Hispanics …from priviledged backgrounds.”

Replied Garre, “Because, Your Honor, our point is that we want minorities from different backgrounds” 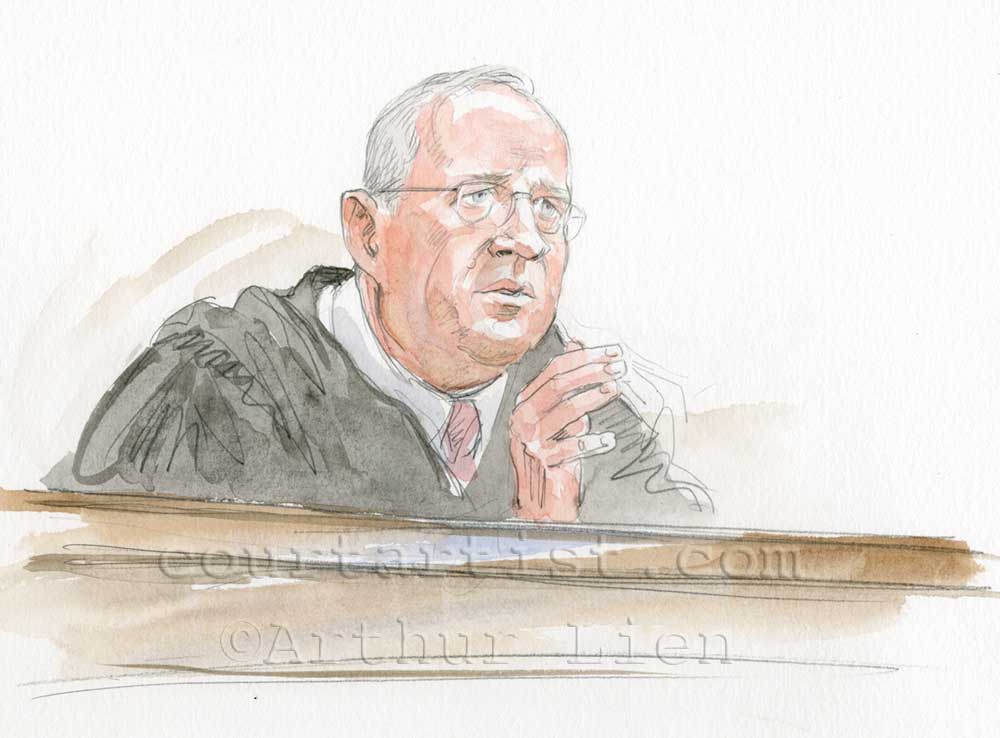 Justice Kennedy, as usual the swing vote on which the case hinges, said, “So what you’re saying is that what counts is race above all.”

The term “critical mass”, refering to the proportion of minorities in the student body, was bandied back and forth with both Garre and Solicitor General Verrilli trying to avoid making it sound like a number. 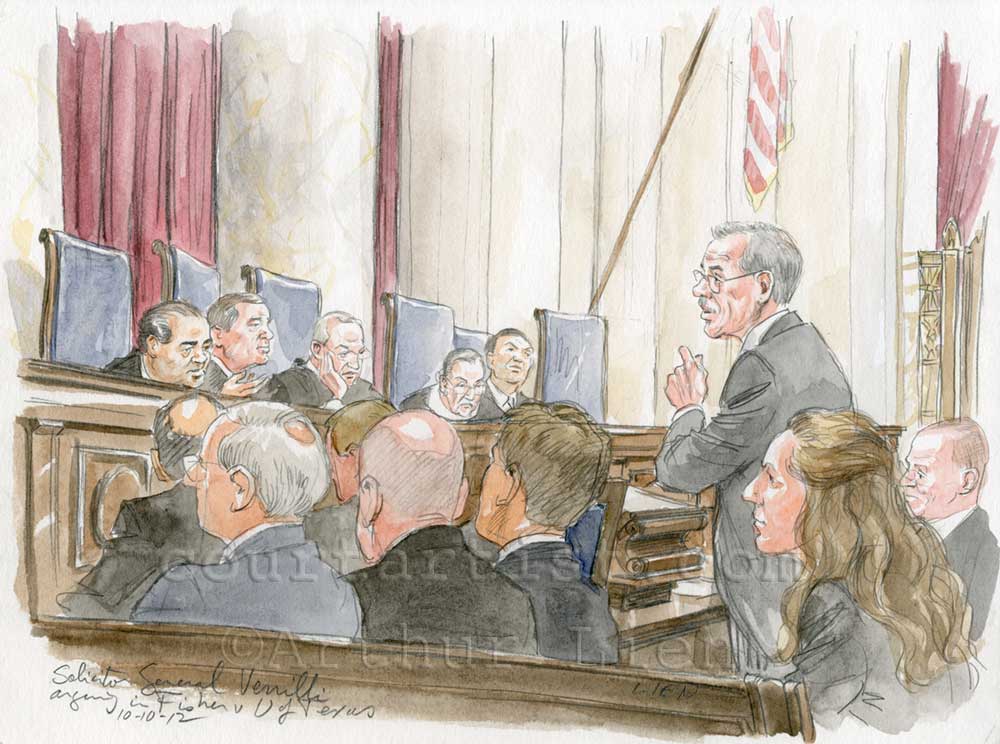 Justice Scalia to General Verrilli, “So we should stop calling it mass.”

Scalia, “Call it a cloud or something like that.”